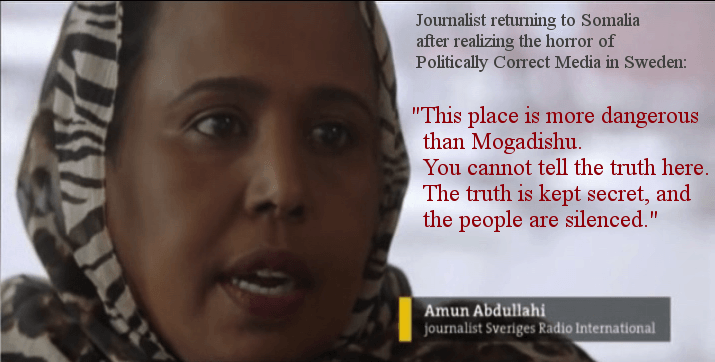 This refugee story is quite the opposite of what one usually sees. Instead of going straight to the welfare office for an array of free stuff, Somali woman Amun Abdullahi attempted to contribute to Swedish society by reporting as a journalist about the jihadist group Al-Shebaab, an al Qaeda spinoff, operating in a Swedish city. 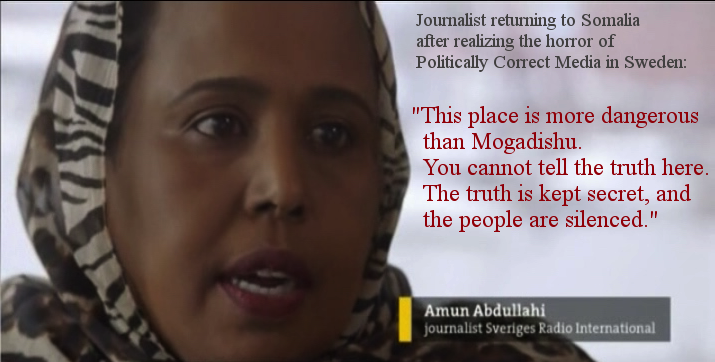 Amun was ostracized and threatened by other Somalis residing in Sweden for blowing the whistle on their jihadist activities. But she was also criticized by Swedish scribblers for discussing an unpleasant topic that blasphemes the belief that diversity is the highest good. As a result, she has given up on the West and is going back to live in Mogadishu and work as a teacher.

It’s a shame that Swedish society couldn’t embrace a courageous woman willing to tell the truth about the largely hostile Muslim tribe which Sweden continues to import.

Here a transcript of the video from GatesOfVienna.net:

Amun is a journalist, and the first thing you notice is
that she has more passion for journalism than most people do.
Let’s say that if all the jobs in the world were a person, then the journalist would be the head
and all the other jobs would be the different parts of the body.
Now that you have spoken so warmly about journalism,
I have to assume that you would like to work as a journalist in Sweden?
Never… I wouldn’t do that.

Amun came as a refugee in 1991, first arriving in Umeå,
which she describes as one of the most beautiful cities on earth.
Later on she moved to Rinkeby near Stockholm.
She had made the whole transition from refugee to reporter on Swedish Radio.
And her knowledge and contacts as a Somali led her onto a story which changed her life.
One morning she recognised a young Somali,
who had changed character after studying religious scripture.
That was the beginning of an investigative report,
in which she revealed how a leader of am after-school activity center lured youths into Al-Shabab
“It’s half past five, you are listening to Ekot.
Many of the young men from Sweden recruited by the Islamist rebel group Al-Shabab
have come from an after-school activity center in Rinkeby.”

After the report was aired, Amun received numerous threats.
And one night her car was torched on the street.
But she had prepared herself for the threats and social ostracism.
But she was not prepared for what followed later on.
A few months later criticisms emerged from an entirely different front.
From her own colleagues on one of Sweden’s most influential political radio shows, “Konflikt”
Here Ekot’s and thereby Amun’s research was dismissed as mere “hearsay” and “rumors”.

Behind it stood Randi Mossige-Norheim, who has been awarded
the Swedish “Grand Journalism Award” among many others
It’s simply normal to ask “did it really happen?”
I don’t think we made a claim of truth. And I could say that about many things.
We did not say that anything was correct or incorrect.
-You didn’t claim anything was correct or incorrect?
No, we didn’t say anything was correct or incorrect.
But isn’t it your job to say, that which is correct?
But what I mean is, we don’t judge anybody. We don’t judge anybody.
Amun tells us, that after the program on “Konflikt” was aired, she became even more ostracized.
And it confirmed the religious groups’ belief, that they were right.
She received more threats, a mutilated doll among other things.
And her own family now turned their backs on her.
My family told me: “You see, what the Swedish journalists have done?”
“Why should you want to report (on Al-Shabab) when the Swedes don’t want to?”
Amun Abdullahi says she ended up moving away from Rinkeby due to the threats.
Ever since that show, she has been unemployed or on sick-leave.

And she will now be abandoning the journalist profession for good.
You cannot grasp this, because you belong to this group of Swedish journalists
who sit around debating… “We really can’t report this, it’s too sensitive.”
“If we do this story the Sweden Democrats could get more votes.” You belong to this group.
In the past 6 months Amun has been in Mogadishu as the leader of a girls’ school.
She is only in Sweden as a matter of coincidence. She will now be moving to Somalia permanently

But Mogadishu is a dangerous place?
It is also dangerous here. This place is more dangerous than Mogadishu.
What do you mean? Here you cannot tell the truth.
The truth is kept hidden, and the people are silenced.
Not all dreams come true, she says.
She came to Sweden as a refugee, now she is fleeing again. On her way to Somalia to start anew.
If you lose your things in a fire, it is not a problem.
But if you have faith in something, and you lose it, then it hurts.
I had faith in journalism, and in spite of its shortcomings I also believed in Swedish Radio.
I also had faith in myself, quite a lot actually.
And all three things were crushed in one go.