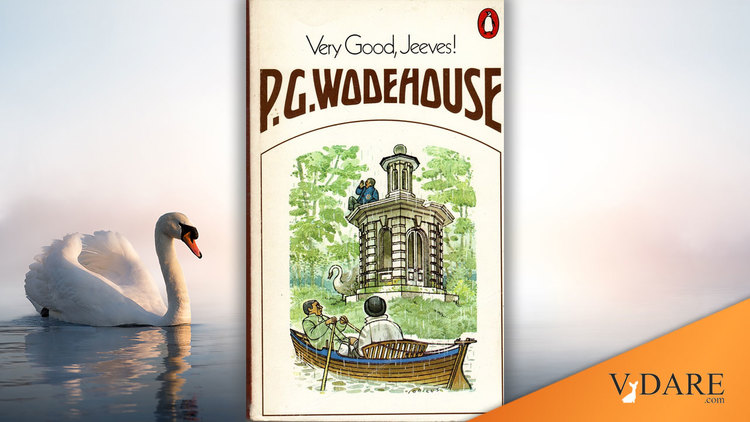 Steve mentions that the only animal he's been in a fight with was a goose, which he defeated by means of a heavy sweater. Betty White said in an interview with Craig Ferguson that the only animal that ever attacked her was a swan, in spite of the fact that as zoo patron and fundraiser, she spends a lot of time with lion cubs, et cetera.

Steve's story of his encounter with a goose reminds me of the time that P. G. Wodehouse's character Bertie Wooster was trapped on top of a "folly" in the middle of an ornamental lake by a menacing swan, in company with a British Cabinet Minister staying at the same Downton Abbey style–country house with him.

Having found that the Cabinet Minister was marooned on this island with no raincoat, in the pouring rain, Bertie rowed out with his manservant Jeeves to rescue him, and him with raincoat. Imagine Bertie's surprise when he found the minister, rather than sheltering inside the folly, was sitting on top of it.

Ionicus, the man who illustrated the Penguin covers of the Wodehouse books, always made sure that the covers accurately reflected some incident of the plot: 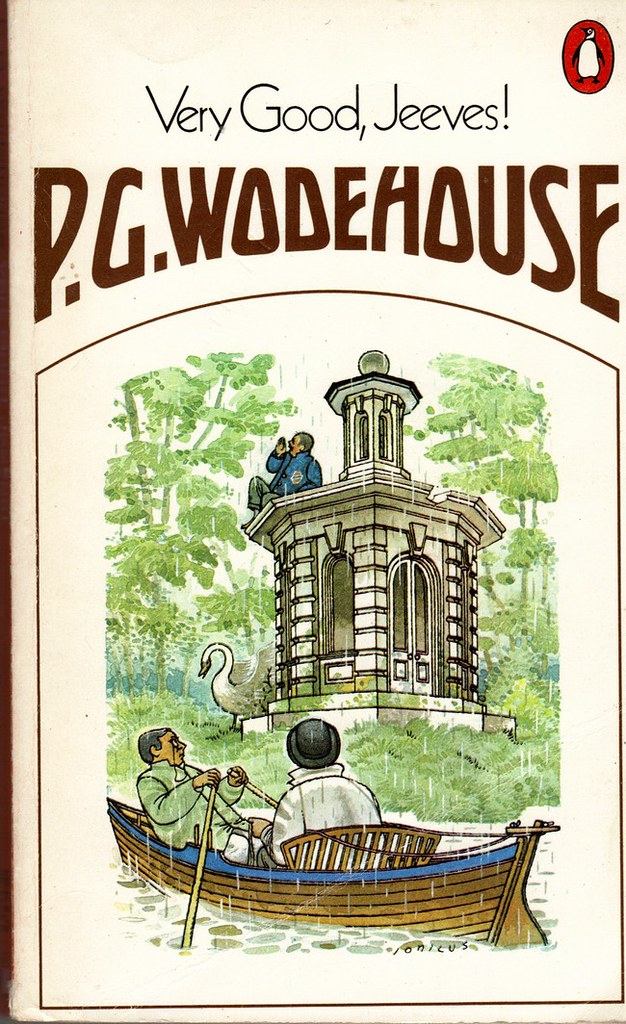 Approaching the folly, Bertie was surprised by a nasty hissing sound, and turned to find it was a dangerous, probably nesting swan, defending its young.

Fortunately, the stonework, above, provided grooves almost as good as a ladder, enabling Bertie to rise to the top of the folly, which he shared with the Cabinet minister.

Then Jeeves came to the rescue, in an incident famous to Wodehouse fans.

“My man,” I explained to the Right Hon. “A fellow of infinite resource and sagacity. He'll have us out of this in a minute. Jeeves!”

“Don't keep saying 'Very good.' It's nothing of the kind. The place is alive with swans.”

“I will attend to the matter immediately, sir.” I turned to the Right Hon. I even went so far as to pat him on the back. It was like slapping a wet sponge. “All is well,” I said. “Jeeves is coming.”

I frowned a trifle. The man's tone had been peevish, and I didn't like it. “That,” I replied with a touch of stiffness, “we cannot say until .we see him in action, he may pursue one course, or he may pursue another. But on one thing you can rely with the utmost confidence — Jeeves will find a way. See, here he comes stealing through the undergrowth, his face shining with the light of pure intelligence. There are no limits to Jeeves's brain-power. He virtually lives on fish.” I bent over the edge and peered into the abyss. “Look out for the swan, Jeeves.”

“I have the bird under close observation, sir.”

The swan had been uncoiling a further supply of neck in our direction; but now he whipped round. The sound of a voice speaking in his rear seemed to affect him powerfully. He subjected Jeeves to a short, keen scrutiny  and then, taking in some breath for hissing purposes, gave a sort of jump and charged ahead.

Well, I could have told that swan it was no use. As swans go, he may have been well up in the ranks of the intelligentsia; but, when it came to pitting his brains against Jeeves, he was simply wasting his time. He might just as well have gone home at once. Every young man starting life ought to know how to cope with an angry swan, so I will briefly relate the proper procedure. You begin by picking up the raincoat which somebody has dropped; and then, judging the distance to a nicety, you simply shove the raincoat over the bird's head; and, taking the boat-hook which you have prudently brought with you, you insert it underneath the swan and heave. The swan goes into a bush and starts trying to un-scramble itself ; and you saunter back to your boat, taking with you any friends who may happen at the moment to be sitting on roofs in the vicinity. That was Jeeves's method, and I cannot see how it could have been improved upon.