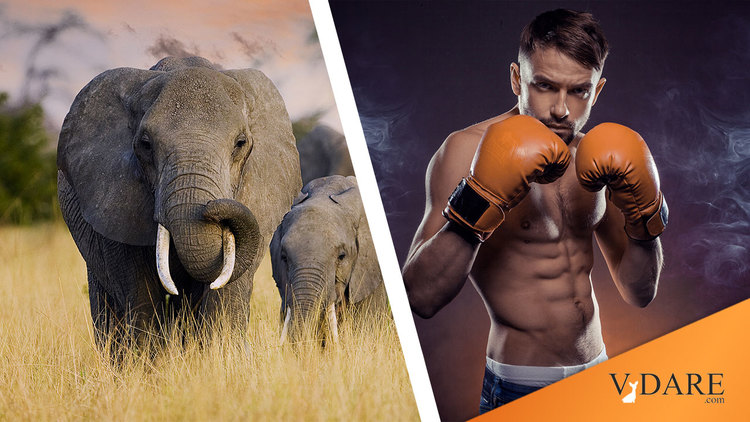 Survey: Which Animal Could You Beat In A Fight?

The YouGov polling firm asked Americans which animals win in a fight. In random head to head matchups of various animals, rhinoceros and elephants were expected to win 74% of the time, but unarmed humans only 17% of the time and geese 14%.

Then YouGov asked if you could beat various animals in fights. I’d say that 22% of American males are unfamiliar with male chimpanzees.

The animal on the first list that comes in last for formidableness (14%) is a goose, which is the only one I have fought. I was walking through a parking lot where a mother goose was sitting on her nest on an island. I got too close and her enraged mate suddenly flew at my eyes. Fortunately, I had taken off my heavy sweater and was holding it draped across my left shoulder with right hand. So I was able to swing the sweater down on the furious beast, knocking it to the ground. The gander wanted a second round to determine for sure who’d win in a fight, but I vamoosed.

Personally, I think I was extremely lucky to come out the winner in my fight with a goose. I’m thankful that the gander’s motivation was wholly defensive toward his nuclear family so that he’d didn’t chase me when I ran away.

The results show that Americans aren’t confident in their abilities. Most Americans are convinced they could beat a rat (72%), a house cat (69%) and a goose (61%) in a fight. Nevertheless, 17–24% still feel like they would lose in a struggle with such creatures, with the rest unsure.

The only other animal listed that Americans tend to think they could take is a medium-sized dog, although not even half (49%) are sure of this.

This confidence drops further with the dogs’ size: only 23% of Americans think they could beat a large dog in a fight, with 58% being sure they would lose.

Americans are least likely to think they could beat a grizzly bear in a fight. A confident or foolhardy 6% think they could emulate Leonardo di Caprio’s Revenant character Hugh Glass in taking down a brown bear (although Glass was armed with a dagger). Lions, gorillas and elephants are seen as similarly invulnerable, with only 8% boasting they could beat them.

YouGov data has previously highlighted male overconfidence, but there is effectively no gender difference when it comes to this top tier of opponents – men and women are about as (un)likely to think they could beat grizzlies, lions, gorillas and crocodiles in combat.

The differences start to emerge with wolves and kangaroos, which 16–17% of men think they could beat compared to 9–11% of women. An Australian man came under criticism a few years ago for punching a kangaroo in the face, although it later emerged he was trying to protect his dog.

I’d say the Cape Buffalo, which is a kind of African cow. The great anthropologist Henry Harpending fought one with a hunting rifle in the Kalahari Desert, but five rifle bullets on target could only temporarily stun it before it chased him up a tree.