“My Homies Die, and White Guys Die”: Covering Up a Hate Crime (Revised) 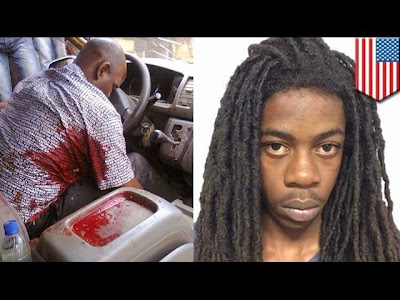 Unfortunately, the only picture I could find of murdered cabbie Vincent Darbenzio was a crime scene photograph, coupled with a mug shot of confessed racist murderer Aazis Richardson

WNEP piped a fake quote into the mouth of the confessed killer of cabbie Vincent Darbenzio, while censoring his true, racist statement.

I thank the reader who reported this to me.

In the perp video on WNEP news webpage, perp says, "Homies die so white guy die." However no news story on this event reports that. In fact WNEP's own article under their video, changes perp words to "everybody got to die."

The fake quote reads: “‘I feel my homies die, everybody got to die,’ said Richardson.” [Actually, as The Boss observed, even the fake quote is racist.]

How frequently are “news” organizations lying like this? Or rather, do they ever tell the truth about race and crime? Meanwhile, the media misrepresent all sorts of statements by whites as "racist."

Note that Aazis Richardson had a female neighbor call the taxi for him, under the pretext that he didn’t have a phone. That was likely because he knew that the company would send a car for a female of any race, but not for a black male. Note too that he was back home again, when he got arrested, which suggests that the robbery-murder was premeditated, and that he had only had the neighbor call the taxi, so that he could rob and murder the driver, and return home with the cash.

A reader pointed out that the victim looks pretty dark for a white man, but Richardson considered him white, and acted accordingly.

SCRANTON — A 16 year old is locked up on murder charges for the shooting death of a cab driver in Scranton.

Aazis Richardson is charged with murder in the first, second and third degrees.

Police said Richardson was riding in Darbenzio’s cab when Richardson shot him because he felt the driver was trying to overcharge him.

“What did you say to him when you guys were in the cab together?” Richardson was asked.

“I didn’t say [expletive] to him, I just told him take this way, he didn’t want to listen, he got his [expletive] shot.”

Aazis Richardson not only showed no remorse for allegedly killing a Scranton cab driver, he also appeared to justify it.

“I feel my homies die, everybody got to die,” said Richardson.

Investigators say Darbenzio picked up Richardson at a double block home on Washburn Street around 3:00 Friday morning then drove him to Valley View Terrace Apartments.

Darbenzio’s body was found around 5 a.m. on Crown Avenue, hanging out of his driver’s side door with two gunshot wounds to the head.

Tracking the cell phone records of who called the cab, police were led back to the double block home on Washburn Street and found Richardson hiding in the attic with a handgun hidden in a bag and took him into custody.

Richardson told police he killed Darbenzio because the cab driver was taking the long way to get to Valley View and ignored Richardson when he told him shortcuts.

Richardson said Darbenzio was ripping him off by trying to run up the meter, so he shot him twice then stole $500 from him.

“You shot him twice, why twice?” he was asked.

“Cause that’s what I do to people who don’t listen,” he said.

Police do say that Richardson himself did not call for the cab, but a female living in the adjoining apartment called for him.

She told police she didn’t know Richardson personally, that he told her he didn’t have a phone and he asked that she call a cab for him.

“What about your parents, do you have anything to say to your family?” he was asked.

When asked: “What about the victim’s family?” Richardson said “[Expletive] them.”

Richardson says he is originally from Newark, NJ and told police he is suspect in a triple homicide there.

The Lackawanna County District Attorney says investigators will be contacting police in New Jersey about those remarks.

Richardson has a preliminary hearing set for May 30.

Update: CNN refers to the confessed killer, who bragged to police of also being wanted for an earlier mass murder, “A 16-year-old Pennsylvania boy.” CNN’s most recent report says that Aazis Richardson has been charged as an adult. It also repeated WNEP’s fake quote, "my homies died, everybody gotta die." [Teen charged as adult in cabbie's killing; Boy allegedly believed cabbie was taking longer route by Sho Wills and Julia Talanova, CNN, last updated May 26 2014 06:56:36 P.M. EDT]