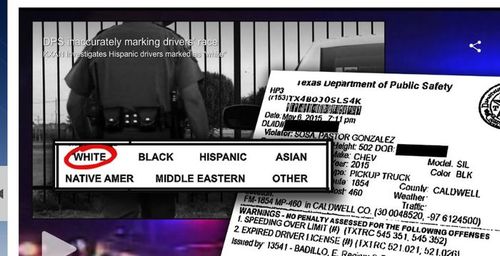 It's a scientific reality and you can tell someone's race just by looking at them. Apparently race is not a social construct.  Cultural Marxists are up in arms that Texas Department of Public Safety Troopers aren't good at determining the race of criminals.  Despite George Zimmerman, there are not supposed to be white Hispanics!

DPS troopers are inaccurately recording the race of large numbers of minority drivers, mostly Hispanic, as white, according to a KXAN investigation. The agency's traffic stop data reveals racial profiling reports are likely flawed, according to experts.

Sergio Raul Mejia got a traffic citation for having his license plate on the dash of his truck in Georgetown last May. The Texas Department of Public Safety trooper who pulled Mejia over put his race as white on the ticket.

A Texas law aimed at preventing racial profiling requires peace officers determine and document the race of every driver to whom they issue a written warning, traffic citation or arrest during a traffic stop. The statute says officers must report: “the person's race or ethnicity, as stated by the person or, if the person does not state the person's race or ethnicity, as determined by the officer to the best of the officer's ability.” White and Hispanic are just two categories listed in the law, which treats race and ethnicity the same for purposes of gathering the statistics.

Of course, Hispanic has no legal or scientific meaning, other than linguistically.  A Spanish language surname has no relation to race—just ask Francisco Franco or Augusto Pinochet.  However, race is real, but in a world where Shaun King and Rachel Dolezal can call themselves black, how is one to fault these troopers?  The Cultural Marxists can't have it both ways. They either have to accept that race is real or claim it is a social construct.  They can't have it both ways.