This item from Stanislaus County has some fascinating frontline farm information about the changing job market in agriculture because of machinery. Almond trees are easy to manage, compared with pickier crops like peaches, so the nuts are growing in popularity among farmers. 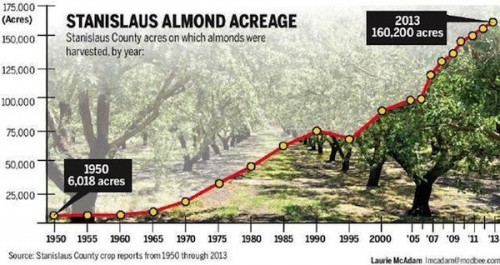 Part of almond attractiveness is the application of mechanical technology. Farm robots and simpler machines have been improving rapidly in recent years, from hand-like pickers to milk robots to take care of the cows.

Actually, the mechanical almond picker shown in the video below doesn’t look that high-tech compared with some of the new gizmos.

The important point of the increased mechanization is the reduction of jobs, particularly for illegal aliens who account for many of the picker workforce. The good news is the reduced need for foreign workers; the bad news is Washington’s disregard for facts deemed inconvenient. Clearly advances in farm robotics lessen the need for foreign workers in the fields, just as in every other area of employment in America.

The remarkable expansion of almond orchards in Stanislaus County has been an economic boom for growers, but it’s come at a price: fewer farm jobs and less crop diversity.

Literally millions of almond trees have been planted in the county during the past decade. Stanislaus agriculture officials calculate 160,200 acres of almonds were harvested last year, which is about double the acreage harvested 15 years ago.

Thousands of additional acres of almonds are being harvested for the first time this fall.

While many of those are new trees now growing on what had been non-irrigated pastures on the county’s east side, others have replaced once-coveted fruit trees, tomato fields, vegetable farms and dairies.

“There was a time when you made more money growing a cling peach than an almond. That’s not the case anymore,” said Paul Van Konynenburg. His Stanislaus farming operation, Britton Konynenburg Partners, grows 1,100 acres of apples, cherries, apricots and peaches.

That’s particularly true because there are fewer labor issues to deal with in almond orchards. For one thing, Van Konynenburg said, farmworkers are “hard to come by” during the fruit harvest season.

“All our fruits are very labor-intensive,” he explained. At the peak of harvest, between his farm’s hired hands and contract laborers, “over 400 people are working” on his 1,100 acres west of Modesto.

Compare that with Trinitas Partners, which has more than 7,000 acres of almonds outside Oakdale. This season, Trinitas employed about 70 full-time and 100 seasonal workers. The Oakdale almond grower managed six times as much acreage with fewer than half as many farmworkers as the Modesto fruit grower.

“It’s not like back in the old days” when farm laborers did all the almond pruning, knocking and raking by hand, said Guadalupe Sandoval, who grew up in Riverbank. “My parents did that work back in the 1950s and 1960s.”

Almonds these days are mechanically harvested. The old joke about why farmers pronounce the word “almond” like they do – “because they have to knock the ‘l’ out of them during harvest” – has been modified, with the word “shake” replacing “knock.”

“What used to take hundreds of workers is being done by machines now,” said Sandoval, who is managing director for the California Farm Labor Contractor Association. “I wish I could say (those machine operators) are making significantly more money (than hand laborers), but I don’t think they are.”

California farmworker wages have increased “about two bucks an hour” the past couple of years, and now the average farmworker in the Valley earns about $13 an hour, according to Jeffrey Michael, director of the Business Forecasting Center at Stockton’s University of the Pacific.

“That could reflect a lower supply of labor or a shift toward higher-paid equipment operators,” said Michael, who considers the higher farm wages “good for the county.”

Michael said the shift from migrant seasonal workers to year-round farmworkers should create more employment stability in Stanislaus, even if the number of farm jobs is lower. “It’s not good for the largest industry in the county to constantly require an inflow of low-wage labor,” Michael explained.