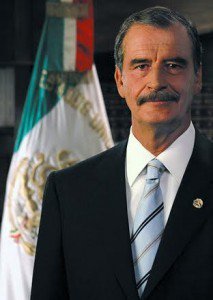 Who Needs Hans-Herman Hoppe When You Have President Fox?

Immigration is, as Peter Brimelow describes, the "Viagra of the State."  Serious libertarians addressed the immigration problem for decades, because, after all, mass immigration is a government policy.  What is happening now isn't a failure of the state — it's the state in action.

However the emerging libertarian-left, best represented by Students for Liberty, is characterized by a refusal to confront state power if doing so might get them in trouble with the dreaded Social Justice Warriors (SJWs for short).  As result, Students for Liberty is gradually becoming a kind of self-parody of left-libertarianism, only capable of attacking to the Right, utterly silent on anything that might get them in trouble with leftists, and even defending things like critical race theory while attacking critics of state sponsored multiculturalism.

If I were creating a kind of ludicrous exaggeration of what student libertarianism would be, I'd say that the guest speaker would be that notorious enemy of the American Nation, Mexican ex- President Vicente Fox.

We are thrilled to announce that former president of Mexico Vicente Fox will be delivering the Closing Address at the 8th Annual ISFLC [International Students for Liberty Conference] in Washington, DC on Sunday, February 15th!