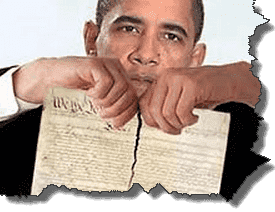 Stopping Obamnesty Tyranny Worth Some 9/11s

Unfortunately today’s DHS funding drama happens to have occurred when VDARE’s regular writers are scattered and on the road for various reasons including earning our livings.

But that makes it easier to keep the key issue in mind. This was eloquently stated by Congressman Steve King today:

"Look at the price that was paid for a Constitution and a rule of law," King said. "Can you explain to the people that are in their graves in Arlington (National Cemetery) that we don't want to delay some paychecks, we're going to sacrifice the Constitution?"

President Obama’s Administrative Amnesty actions are deeds of tyranny far beyond whatever was imputed to George III as Jeff Sessions has noted. They actualize the fears which triggered the American Revolution.

And what will he do next? Consider The Cartman Presidency: There Is No Check On President Obama by Ben Domenech The Federalist February 27, 2015

The news this morning from the Imperial City: President Obama plans to ban certain bullets by executive action, threatening the top-selling AR-15 rifle...

Practically speaking, today’s Left finally has the situation it wants: a sufficiently progressive president in his second term is, in effect, an unchecked dictator…

There is a description for such a leader, but it is not a president: it is a monarch, a king who is unchecked by any legislature or bound by any commitment to the rule of law, divorced completely from constitutional limited government.

America is being converted into a simulation of an Eastern European or African despotism, reflecting the intellectual traditions of the Minority Occupation Government.