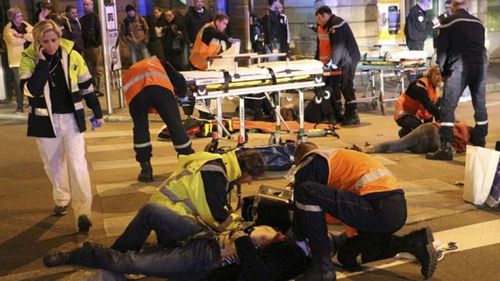 Thank God France has this new vibrant population to enrich the daily lives of its citizens.  After all, it's not like French culture was worth studying or experiencing until there was a mass influx of Muslims from the Third World.

French authorities say that 13 people were injured Sunday when a driver deliberately slammed his car into crowds in several locations around the city of Dijon in eastern France, amid reports that the driver was heard shouting "God is great!" in Arabic.

Sky News reported that witnesses also heard the driver shouting that he was acting on behalf of "the children of Palestine" during the rampage, which lasted approximately 30 minutes. Two of the injuries were described as serious, though no further details were immediately available.

The Interior Ministry told the Associated Press that the driver in Sunday's car attack, a 40-year-old driving a Renault Clio, was known to police for minor offenses in the 1990s. Eric Delzant, a local police official, told Europe 1 radio the driver, who was detained, suffered from psychological problems.

French officials Monday cautioned against jumping to conclusions about the attacker or his motives.

It was not long ago the Islamic State was pushing for "lone wolf attacks" against European and American targets.

Adnani also urged its backers to kill civilians, especially Americans, French nationals, and nationals of other countries that took part in the bombing raids in Syria.

“If you can kill an American or European infidel specifically French, Australian, or Canadian or other infidels from the allied countries who are fighting the Islamic State, put your trust in God and kill him in any way or manner whatsoever,” he stated.

“Whether the infidel was civilian or military, it is the same, kill him.”

The attempted vehicular homicide comes on the heels of another "lone wolf" terrorist attack against police in France.