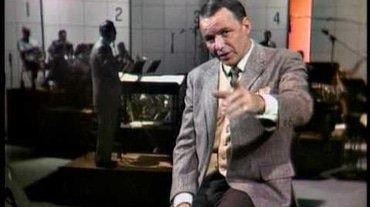 For the 100th anniversary of Frank Sinatra’s birth tomorrow, Mark Steyn, with his encyclopedic knowledge of mid-Century songwriters, has been posting essays on 100 Sinatra songs and how they evolved.

Steyn starts with It Was a Very Good Year, which, I hadn’t realized, had been composed by Ervin Drake as a pseudo-folk song for the Kingston Trio. It wasn’t a hit for them.

There’s a television documentary about the recording of the song. The first thing Sinatra asks the producer when he finishes singing is how long it is? “3:20?” When he hears it came in at 4:12, he looks worried (radio didn’t like singles that long) and jokes, “That’s longer than the first act of Hamlet.” Later, he’s shown listening to the playback, after which he comments, “They’ll play it.”

My favorite Sinatra record? It’s not a very original or idiosyncratic choice, but as the apogee of an era, you can’t beat 1956?s I’ve Got You Under My Skin.

Steyn’s up to #91, so it’s fun to guess what he’ll end with. I’m guessing that #98 will be the ballad All The Way, #99 the Gershwin tune They Can’t Take That Away from Me, and #100 the drunk driving national anthem One for My Baby (And One More for the Road).