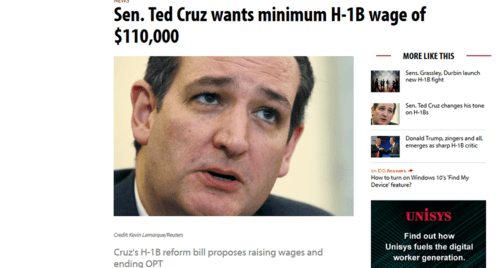 Ted Cruz has recently shown some backbone [Sen. Ted Cruz wants minimum H-1B wage of $110,000, by Patrick Thibodeau, Computerworld, December 11, 2015], on the issue of Guest Worker Visas by introducing a bill that proposes a $110,000 per year minimum wage for holders of H-1B visas.

I think it is very telling that this comes rather soon before the Iowa Caucuses. Iowa is after all the birthplace of the first electronic computer. Iowa is also a state with above average math test scores. A tech career was until recently a traditional upward mobility route for kids leaving a family with a farm or small business. I suspect the families of many American tech workers who have been struggling in recent years will welcome the attention Cruz is focusing on this issue. New Hampshire also is home to its own substantial tech industry and has a similar profile.

I welcome the Cruz/Sessions bill. However, I would remind folks that $110K/year is not a particularly high salary for workers who may have invested hundreds of thousands of dollars in their education (with the student loans to prove it) and are living in areas like New York City or Silicon Valley with rather high living costs.

$110K/year is a good base salary to assure that entry level jobs in lower cost of living areas are filled first by recent grads from US universities, but prevailing wage should be adjusted by cost of living in each county. The cost in San Jose California needs to be at least 60% above the median and in Manhattan it should be at least 120% above the median. I would also suggest that a portion of H-1b salary be required by law to be placed into a supervised savings account that would be returned upon repatriation, but could be used for fees if the the H-1Bholder later obtains a green card and fines if the H-1B holder overstays their visa or is involved in criminal activity.

This arrangement would also mean H-1B holders would have a disposable income similar to US citizens who have substantial student loans so the H-1b holders would not have a marked advantage obtaining housing.

I want to offer my sincere thanks to Senator Sessions and Senator Cruz for introducing this bill and to Senator Sanders for his long history of attention to Guest Worker Visas.