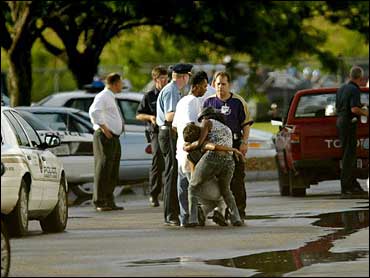 In my column yesterday, on the subject of disgruntled black workplace shooters, I included

2004—Elijah Brown, disgruntled employee of ConAgra, in Kansas City, killed five people and wounded two others. Much Googling has been unable to come up with a definite race for Brown, or for his non-Hispanic victims. (I just refuse to believe that a guy named Elijah Brown who works in a ConAgra plant in Kansas City, Kansas is white).

Here is the original report from thekansascitychannel.com before all reference to race was scrubbed.

This is from an early Archive.org capture of   thekansascitychannel.com/news/3497107/detail.html, pasted with some of its original formatting:

POSTED: 9:56 a.m. CDT July 6, 2004 UPDATED: 7:51 p.m. CDT July 6, 2004 KANSAS CITY, Kan. — Employees of a ConAgra Foods Inc. plant returned to work Tuesday morning, four days after one of their colleagues killed five people at the meatpacking facility before turning the gun on himself. The plant had been closed since Friday, when 21-year-old Elijah Brown (pictured, left) — described by police as a disgruntled employee —opened fire during the plant's 5 p.m. break.A steady stream of employees arrived at the plant before the 7 a.m. start of the first shift, all showing ID to security. Reporters were not allowed into the plant, where a spokeswoman had said the shift would begin with an employee meeting and short memorial service. Trucks making deliveries to the plant were turned away until 8 a.m.The plant's second-shift workers — many of whom were on duty when the shootings occurred — returned to work around 1 p.m.For many, Tuesday's return to work was the first time they had been at the plant since they waited nervously just off company grounds Friday for word on who had been killed."It's sad. You hate to see anybody lose their life. It's so senseless," said Pat Carothers, who works at the plant. "Some of the (workers) maybe want to leave and go home; they're not ready to go back to work yet."[More]

That's from the August 4 capture, the October 23, 2004 capture includes the words "(pictured, left)" but doesn't even have a space for the picture.