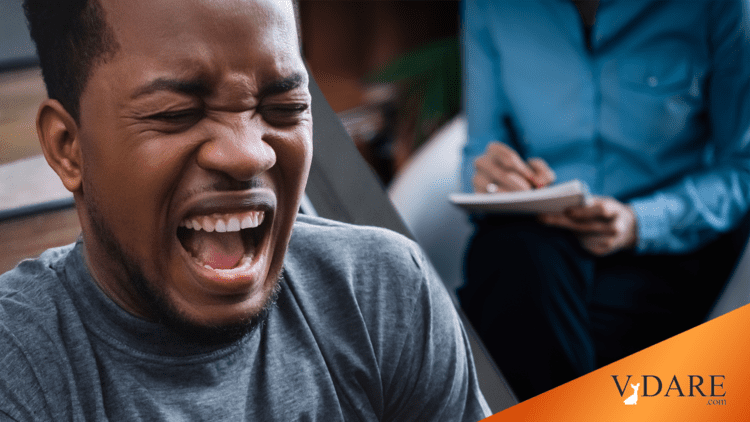 For blacks, there are three ways to keep it real: Angry, Violent, and Victim.

Cognitive Behavioral Therapy (CBT) is a useful approach to changing one’s way of dealing with the world. Wikipedia describes it: “CBT focuses on challenging and changing unhelpful cognitive distortions and behaviors, improving emotional regulation, and the development of personal coping strategies that target solving current problems.”

On-line, you can find lists of common cognitive distortions that make it very difficult for those who hold them to achieve happiness or success. What is remarkable, is that Western society, through its education system and media, imbues black people with these cognitive distortions and thinks it is doing them a favor.

* Resenting other people (Whites)
* Bitterness about the past (Slavery, Jim Crow, Red-lining, Emmett Till)
* Self-centeredness (Black Lives Matter)
* Blaming other people for one’s problems (Racism)
* Feeling superior to everyone else (We was kangz!)
* Ill-will towards strangers (Polar bear attacks)
* Focus on the faults of other people (Whites, Asians)
* Being overly pessimistic (Black man ain’t got no chance in the white man’s world)
* Blowing things out of proportion (Noose! Banana peel! Cotton balls!)
* Always attributing negative motives behind the actions of others (Why did he call me “articulate”?)

There are sites on-line where they go into depth on cognitive distortions, such as at https://positivepsychology.com/cognitive-distortions/

Read them and you can’t help but be struck by how this kind of self-defeating thinking is encouraged in blacks throughout their lives.