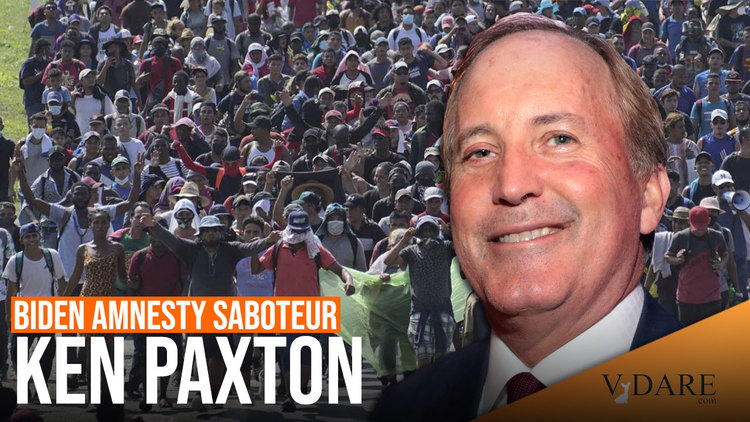 The several States  are leading the fight against the ongoing Biden Regime Administrative Amnesty. In case after case, Texas, Florida, Missouri and other States’ Attorneys General (AG) are filing Federal lawsuits against illegal actions by the Biden Regime, and are succeeding.

Both DACA and DAPA have been effectively ended, with the only discussion about seizing the beneficiaries' Employment Authorization Documents (EAD) and placing them in removal proceedings. We can thank Judge Andrew Hanen for his courage and legal scholarship, though, frankly, he should have ordered all DACA and DAPA beneficiaries arrested and placed in deportation proceedings. Hopefully that is the next step.

But we could not have had DACA and DACA killed off without Ken Paxton, the Attorney General of Texas, and the support from other Attorneys General. Sadly, it took the States filing lawsuits to end DACA, while Jeff Sessions, the Attorney General of the United States, fiddled while Rome burned, attempting to appear moderate and inadequately defending the Trump Administration’s tactic to end DACA administratively.

Thankfully, Paxton and others are not resting on their laurels. They continue to sabotage the Biden Regime Administrative Amnesty, with the AG coalition filing additional lawsuits against various manifestations of the Biden criminal regime.

First, a lawsuit against Catch-and-Release.

Catch-and-Release was the Clinton Administration policy of arresting illegal aliens, but releasing them at the border to travel into the interior of the United States to wait for their immigration hearings before the Executive Office for Immigration Review (EOIR). Congress soon became fed up with this Clinton Regime Administrative Amnesty, and in 1996 ended, or so they thought, Catch-and-Release at the border by creating Expedited Removal, an administrative process to remove illegal aliens immediately after arrest without recourse to the EOIR or Federal courts.

But the Biden Regime has brought back Catch-and-Release with a vengeance. Currently all illegal aliens, other than from Mexico, are released into the United States. The law requires that all those aliens be removed by Expedited Removal as they do not have a credible claim of persecution. However the Biden Regime is treating any claim of fear of return as a credible claim of persecution, then releasing those aliens into the United States, and, in most cases, not even serving the alien with DHS Form I-862, Notice To Appear (NTA), an order to appear at a date and time certain for a removal hearing, with those not served are being issued a DHS Form G-56, Call-In Letter, to appear at an onward ICE office to present themselves to be served with the above NTA. Few are making their appearances, and, of course, ICE is not going out and arresting those beneficiaries of Catch-And-Release.

The new policy, called “Parole + Alternatives to Detention,” releases illegal immigrants within the borders of the United States without starting a legal process for removal.

The complaint states that federal immigration officials are assisting migrants in resettling around the country and that the Transportation Security Administration is “accepting immigration arrest warrants as identification sufficient to board a domestic flight.”

“The Biden administration has not only consciously refused to enforce immigration laws, but it has also developed an operation to secretly resettle illegal aliens into communities across Florida and the rest of the United States,” DeSantis said. “They’re doing this in the dark of night without any coordination with states, without any background checks, and without any efforts to initiate the legal process for their removal. I am glad Attorney General Moody is continuing our fight to hold the Biden administration accountable for its reckless disregard for immigration laws.”

Ashley Moody, Attorney General Of The State Of Florida, Heroine

Similarly, States’ AGs are also challenging another perverse creation of an immigrant category without legal basis by the Biden Regime. The Central American Minors (CAM) program was initially created by the Obama Regime, but deep-sixed by President Trump.

Florida joined a multi-state coalition led by Texas suing the Biden administration for reinstating an Obama-era program that allows illegal immigrants to enter and remain in the U.S., bypassing laws established by Congress.

In addition to Texas and Florida, Indiana, Missouri, Montana, Oklahoma, Arkansas and Alaska joined the lawsuit over the Biden administration’s reinstating a 2014-era Central America Minors (CAM) Program that was halted by the Trump administration in 2017.

The lawsuit announcement came after attorneys general from 12 states, all Republicans, participated in a border summit in the McAllen, Texas, area hosted by Texas Attorney General Ken Paxton.

Florida Attorney General Ashley Moody attended the summit and met with law enforcement officials “about the dramatic overrun of the border brought on by President Joe Biden’s reckless immigration policies – the impact of which is resulting in public safety ramifications for citizens and taxpayers far beyond U.S. states that border Mexico,” she said.

“After seeing the chaos in person, it is even more clear to me now that Biden and [Department of Homeland Security Secretary Alejandro] Mayorkas are building their own illegal organization to transport illegal immigrants into and around our country – thumbing their noses at federal laws. I will not only work aggressively to stop these illegal acts, but I will continue to inform Floridians about what their federal government is actually doing, and the dangers associated with those decisions,” she added.

Basically, the Biden Regime, as the Obama Regime did, is completing the illegal alien smuggling conspiracy, with DHS paying for the plane and bus trip for the illegal aliens to join their family members.  (As an aside, why is the Center for Immigration Studies referring to illegal aliens as “migrants”? “Migrants” was adopted by illegal alien support groups to disguise the illegal nature of what they call “migration” but is illegal immigration, border jumping, an invasion. )

While this is all well and good, I applaud the resourceful and ingenious States’ Attorneys General in their efforts to sabotage and roll back the illegal Biden amnesty, but John Roberts is a thin reed to rely on.

What should Congress do? Now, Congress will do nothing, but the Republicans are expected to win big in 2022 midterm elections. Do they have a plan? Here is what they should do:

The only way to pass legislation is to attach immigration related riders to must-pass legislation, mostly budget items. And since all budget items originate in the House of Representatives as required by the Constitution, the Republicans have enormous power to impose new immigration policies and practices on the Biden Regime, much like Congress handed Vietnam over to the Communists through the budget process.

First, language should be attached that is effective at least temporarily, say, until January 2025, mandating use of Title 42 public health restrictions against illegal entrants with immediate expulsion, making Remain In Mexico mandatory as required by law now, and making Expedited Removal nondiscretionary.

To enforce these new standards for enforcing immigration law, impose a nonfeasance standard on all Federal employees requiring that those Federal employees or offices who encounter illegal aliens to take affirmative action to enforce relevant statutes, authorizing them to ignore any orders or instructions from supervisors, management, or Biden Regime political appointees to the contrary.

We shall see if a new Congress is serious about the Biden invasion.