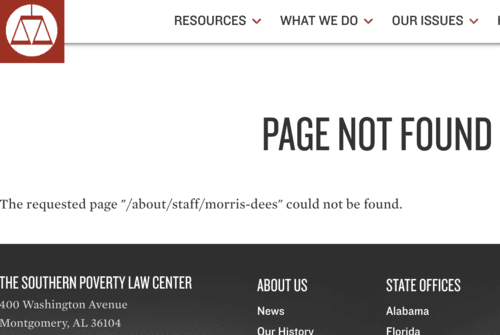 And then they came for Morris Dees … Junk mail genius Morris Dees has been one of the grand rogues of American public life for decades. His minions at the SPLC were tiresome pests, but, personally, I’m going to miss the old bastard himself. Well, at least, kind of …

From the Montgomery Advertiser:

In a statement attributed to SPLC president Richard Cohen, the Montgomery-based organization confirmed Dees’ dismissal was effective on Wednesday.

“Effective yesterday, Morris Dees’ employment at the Southern Poverty Law Center (SPLC) was terminated. As a civil rights organization, the SPLC is committed to ensuring that the conduct of our staff reflects the mission of the organization and the values we hope to instill in the world. When one of our own fails to meet those standards, no matter his or her role in the organization, we take it seriously and must take appropriate action.

“Today we announced a number of immediate, concrete next steps we’re taking, including bringing in an outside organization to conduct a comprehensive assessment of our internal climate and workplace practices, to ensure that our talented staff is working in the environment that they deserve – one in which all voices are heard and all staff members are respected.

“The SPLC is deeply committed to having a workplace that reflects the values it espouses – truth, justice, equity and inclusion, and we believe the steps we have taken today reaffirm that commitment.”

Dees’ biography appeared scrubbed from the SPLC’s website as news broke of his termination on Thursday afternoon.

Dees, 82, co-founded the SPLC in 1971. The Montgomery-based attorney has been a fixture in politics since the groups ascension, though his organization has faced scrutiny in the past.

A 1994 Montgomery Advertiser series provided a deep look into the organization controlled by the multimillionaire Dees, illustrating his near-singular control over the organization and its mammoth budget.

It revealed a figure seen as heroic by some and single-minded by others who criticized Dees as more focused on raising money than actually fighting injustice.

The series also alleged discriminatory treatment of black employees within the advocacy group, despite its outward efforts to improve the treatment of minorities in the country. Staffers at the time “accused Morris Dees, the center’s driving force, of being a racist and black employees have ‘felt threatened and banded together.’” The organization denied the accusations raised in the series.

Over the years, the Center has continued to amass a massive war chest of funds from donors amid differing levels of scrutiny. …

This is a developing story. Check back for updates.

What do you figure is The Scandal that brought down Morris after all these years? Sex? Race? Money? Something else?

in Taki’s Magazine a couple of years ago, I collected a lot of links from investigative journalists into the SPLC. Info about the SPLC has been piling up for decades but it barely made a dent in the Conventional Wisdom.

For example, here’s the November 2000 article by Ken Silverstein in Harper’s: The Church of Morris Dees.

Here’s old time lefty Alexander Cockburn on Morris in The Nation in 2009: “King of the Hate Business.”

Here are remarks that Jim Tharpe, a reporter for the Montgomery Advertiser, gave on his big 1995 investigation into the SPLC.

Here’s Charlotte Allen’s in-depth 2013 profile in The Weekly Standard: “King of the Fearmongers.”

Poll: What do you think, specifically, caused the Southern Poverty Law Center to fire its founder Morris Dees today?

Any chance that Morris Dees will get MeTooed?

But don’t let that bias your vote in the poll.