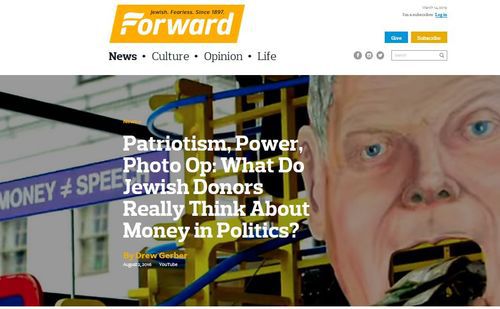 Where did Rep. Ilhan Omar get those “tropes” about the role of campaign money in influencing American policy that Nancy Pelosi found so objectionable?

Perhaps from watching the 2016 HBO documentary Meet the Donors: Does Money Talk? by Alexandra Pelosi, Nancy’s daughter. From The Forward in 2016:

A new documentary on HBO by Alexandra Pelosi, the daughter of Democratic Minority Leader Rep. Nancy Pelosi, explores the influence of money in politics by interviewing some of the biggest donors in the game. Of the more than dozen big-time donors interviewed, over half are Jewish.

Perhaps due to the fact that she is the daughter of a prominent and divisive Democratic politician, Pelosi’s documentary “Meet the Donors” emphasizes Democratic (and Jewish) donors while heavyweight GOP bankrollers are far and few between, including prominent Jewish Republicans like Sheldon Adelson and Sam Fox.

But Pelosi’s documentary captures the thoughts of some of the biggest Jewish donors in politics today.