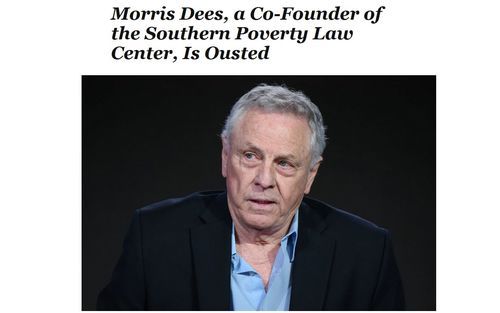 NYT: Morris Dees Known as "The Mother Teresa of Montgomery"

Morris Dees, a Co-Founder of the Southern Poverty Law Center, Is Ousted

The Southern Poverty Law Center, one of the nation’s largest legal advocacy groups, announced on Wednesday that its co-founder and chief trial lawyer, Morris Dees, was fired after nearly a half-century, during which he helped grow the organization into a legal powerhouse with an endowment of nearly half a billion dollars focused on hate crimes.

The president, Richard Cohen, did not give a specific reason for the dismissal of Mr. Dees, 82, but in a statement released Thursday, Mr. Cohen said, “as a civil rights organization, the S.P.L.C. is committed to ensuring that the conduct of our staff reflects the mission of the organization and the values we hope to instill in the world.”

He added that an independent assessment of the center, which is based in Montgomery, Ala., will soon examine the workplace to ensure that it would be “one in which all voices are heard and all staff members are respected.”

“When one of our own fails to meet those standards, no matter his or her role in the organization, we take it seriously and must take appropriate action,” Mr. Cohen said. …

In a 2017 profile published by Politico, Mr. Dees was described as a “marketing genius,” who was known informally as “the Mother Teresa of Montgomery.”

“The Montgomery Grift of Alabama” is more like it.