Mediaite observed something interesting about the Latino Victory Project  ad, supporting Democrat Ralph Northam’s candidacy in Virginia, which despicably depicts a supporter of Ed Gillespie chasing minority children in a pick-up adorned with a Confederate flag.

You can see the ad below, courtesy of VDARE.com—the Latino Victory Project  has pulled it, possibly in light of a recent Muslim immigrant mass murder committed in Manhattan—with a pickup truck.

But even before that, the ad was particularly tone-deaf in a Virginia campaign.

One of the kids away running a way is a girl in a hijab. And indeed, a motorist in Northern Virginia did recently chase down and kill a Muslim girl. 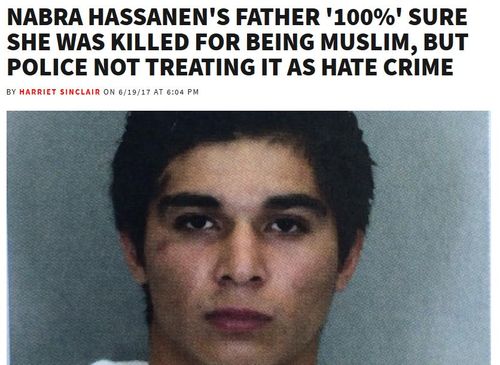 Except he wasn’t white. And he wasn’t, as far we know, a Gillespie voter. Or any kind of voter. He was an illegal immigrant. (Pictured right, Darwin Martinez Torres, native of El Salvador, resident of a Virginia sanctuary county.)

And he was in the country because politicians like Northam won’t deport illegal aliens.

One has to hope this unspeakable attack on average Virginians who will or might vote for Gillespie affects Americans the same way that Hillary Clinton’s calling Trump supporters “deplorable.”

Perhaps on Nov. 8, the meme will be “This is how you got Gillespie.”