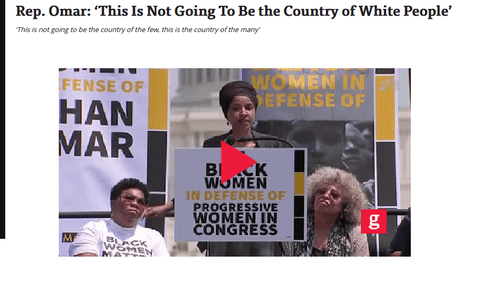 Somalis In Congress:"This Is Not Going To Be The Country Of White People"

One more on the Somalis. Also on Tuesday, Somali congressgal Ilhan Omar, at a Black Lives Matter rally outside the Capitol building, let loose on the hateful, racist, genocidal nation that took her family in from the refugee camp they were living in 22 years ago. Speaking of the U.S.A., she told the cheering crowd that, quote:

If those demographic statistics from Switzerland are anything to go by, I fear the filthy little ingrate may be right. What fools we are!

Well, don't say I didn't warn you. Quote from self, writing eight years ago in Taki's Magazine, quote:

Any population has a lot of variation, and I have no doubt there are many law-abiding and industrious Somalis. When you take in 4,000, or 16,000, or 100,000, though, the law of averages is going to kick in — as of course it kicks in unmistakeably in Somalia itself. Human-capital-wise, the Somali averages are simply terrible.