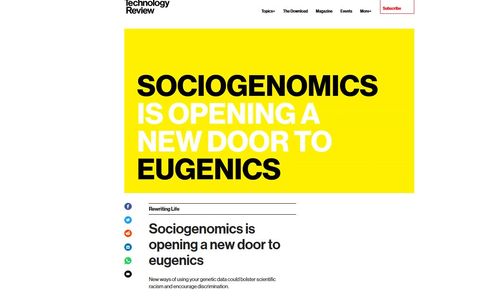 "Sociogenomics Is Opening a New Door to Eugenics"

From the MIT Technology Review:

Sociogenomics is opening a new door to eugenics

By the way, to prevent confusion, Nathaniel Comfort and Nathan Cofnas are different people with different views.

I have this problem where I only read the first one or two syllables in words so I’m prone to mistake names like this for each other. I was reading Neal Stephenson’s novel Cryptonomicon and the extremely nerdy math genius hero Lawrence Waterhouse does this even more so: he never remembers more than the first syllable of the first name of anybody he meets, such as when he’s at Princeton in the late 1930s, there are two guys named “Al-” something something (whom the reader is supposed to figure out are Einstein and Turing).

Want to predict aggression? Neuroticism? Risk aversion? Authoritarianism? Academic achievement? This is the latest promise from the burgeoning field of sociogenomics.

I’d actually never heard the name “sociogenomics” until a few weeks ago.

… The evolutionary biologist Graham Coop shows that big data can lull us into a false sense of objectivity. The success of GWASs, he writes, “seems to suggest that we’ll soon be able to settle debates about whether behavioral differences among populations are driven in part by genetics.” However, he adds, “answering this question is a lot more complicated than it seems.”

Coop offers what he calls a “toy” example of a misleading polygenic study—a thought experiment. The hypothetical research question: Why do the English drink more tea than the French?

Coop’s imaginary researcher, Bob, uses data from existing databases like the UK Biobank. He counts up the average number of alleles (different forms of a gene) associated with a preference for tea in English people and French people. “If the British, overall,” Coop writes, “are more likely to have alleles that increase tea consumption than French people, then Bob might say that we have demonstrated that the difference between French and UK people’s preference for tea is in part genetic.”

Being a conscientious scientist, of course, Bob would offer the usual assurances about the quality of his data. He would piously insist that his results do not show that all Brits who drink lots of tea do so because of their genes—only that the overall difference between the populations is partly genetic.

Coop then walks us through the problems with this thinking.

Is it supposed to be persuasive to make up a “toy” straw man and then debunk that, and then ask readers to assume that what the real scientists are doing is just as dumb as the tea toy?

The evolutionary “just so” story for this is pretty plausible: Italians have been drinking wine for 10,000 years so they’ve evolved more defenses against killing themselves quickly with alcohol than Native Americans have in the 400 or so years their ancestors have been exposed to alcohol. But we don’t really know for sure.

If somebody were to finally figure out the precise genetics of this difference, somebody else might eventually come up with a way to medically mitigate this terrible burden on American Indians. But many people today feel it is Wrong to even notice the differences between the two racial groups, so it’s hard to make any progress on helping Indians via research.