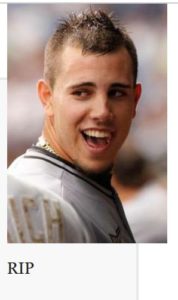 José Fernández Was the Future of Baseball

The Marlins’ exuberant, Cuban-born pitcher changed what it means to play the game the right way.

José Fernández, the 24-year-old Miami Marlins pitcher who died this weekend in a boating accident off the coast of Florida, was imprisoned in Cuba as a teenager for trying to escape the island. … Though he started only 76 games in his career, Fernández had the potential to be a Hall of Famer.

… But Fernández also had the potential to change a sport that desperately needs changing. The Marlins starter loved the competition and camaraderie of baseball, and he loved striking fools out. From the moment he made his debut for the Marlins, he ignored the fusty expectation that players—often young, Latino players—dial back their exuberance lest they annoy their tight-assed opponents. At age 24, he’d already started to modernize the game’s old-fashioned codes and what it meant to “play the game the right way.”

Fernández defied those codes during his rookie year. The then 21-year-old hit his first major-league home run on Sept. 11, 2013, though “hit his first major-league home run” doesn’t do this shot justice. Fernández crushed the ball, and he was justifiably thrilled, dropping his bat and watching his shot arc over the left-field fence before commencing a slow trot around the bases.

When Fernández reached home plate, Atlanta Braves catcher Brian McCann started lecturing him, whereupon the benches cleared, and both teams pretended to want to fight each other. “I just told him you can’t do that,” McCann said later. “You can get someone hurt. It was just something that didn’t need to happen.” Braves third baseman Chris Johnson added, “The kid is a good pitcher. He’s got some other stuff going on, too, that upsets people sometimes. There were some guys in the dugout who weren’t too happy with the smiling after getting people out and all of that kind of stuff.”

Actually, that’s not what happened (see below).

Veterans lecturing rookies on how to behave is as much a part of baseball’s folkways as players scratching their crotches. These lectures are typically focused on ensuring the game is as much of a joyless slog as possible … Gossage made the subtext of the sport’s on-field policing explicit: White players born in the United States don’t think their Latino counterparts conform to the sport’s behavioral norms.

Back in November, the bat-flipping Bautista argued in a piece that appeared under his byline in the Players’ Tribune that Latin players can make baseball great again if the sport’s powers that be allow them to be themselves. “Baseball is a metaphor for America,” the Players’ Tribune article said. “It’s a giant melting pot made up of people from all over the world and all walks of life. How can you expect everybody to be exactly the same? Act exactly the same? More importantly, why would you want them to?”

I disagree with the Blue Jays slugger. It would be perfectly fine if every baseball player acted the same way on the field, so long as they all chose to act like José Bautista and José Fernández.

A more interesting hot take would be on Fernandez as a less extreme version of the transracial Brazilian soccer star Neymar Jr.: the richer he got, the fairer he looked.

It appears to be a tradition among Hispanics that is currently 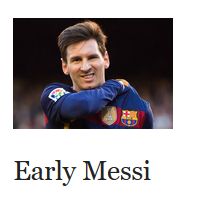 For example, soccer great Lionel Messi, an Italian-Argentinean, used to have brown hair. 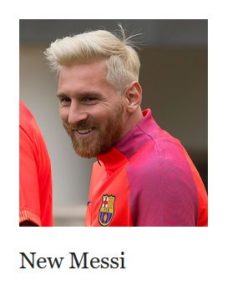 Update: It turns out that, contra Josh Levin’s ethnic prejudices, Fernandez initiated the 2013 tiff with the Braves by getting angry when Brave Evan Gattis hit a homerun off Fernandez and lingered at the plate to watch it. And then Fernandez massively exacerbated the situation by spitting in the general direction of an opponent.

It seemed to begin boiling over in the top half of the sixth inning when Atlanta Braves rookie Evan Gattis … took Fernandez deep for a solo home run. That would be the only run Fernandez allowed in seven innings — he earned his 12th victory in Miami’s 5-2 win — but he clearly took exception to the extra second or two Gattis took to admire his home run. …

As the inning continued, Chris Johnson was a flyout victim for Fernandez, but as he returned to the first base dugout there appeared to be a verbal exchange with Fernandez. A little extra fuel for a fire that was already burning quite strong.

We move ahead to bottom of the inning. In what proved to be his final at-bat of the season, Fernandez muscled up for his first career home run — a no doubter to left center field — and let’s just say he took a second or two beyond what Gattis did to admire his own power. The message Fernandez was sending was pretty clear, but I don’t think the Braves appreciated the delivery. Then as Fernandez slowly jogged around the bases, he appeared to spit on the ground or at the feet of Johnson as he approached third base.

Here’s Fernandez spitting at third base:

Whether there was intent behind it or not, it didn’t look good, and when Fernandez arrived at the plate an angry Brian McCann was there to greet him. Johnson wasn’t far behind. A heated exchange and the emptying of both benches followed.

So Levin got his facts backwards: rather than the tight-assed Americanos objecting to the fun-loving Latino’s natural exuberance, the Latino objected earlier to an American showing off. (Of course, there may well have been a prior incident before that.)

Anyway, a more interesting question than the Unbearable Whiteness of Baseball is: After 50 years of Communist isolation, what are Cubans going to be like when their country finally opens up? My vague impression from recent ballplayer arrivals, such as Yasiel Puig, are that they are going to be a handful. Communism isn’t really good at inculcating self-discipline.

It’s kind of like the difference in California between Armenians whose names end in -ian and -yan.