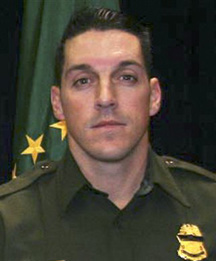 Fans of Barack Obama like to imagine that his administration was “scandal free” though nothing can be further from the truth. There were plenty of audaciously evil scandals, but the adoring liberal media never reported on them so they barely exist. Breitbart has an instructive list: 18 Major Scandals in Obama’s ‘Scandal-Free’ Presidency.

Near the top of the list is one of the stupidest, most dangerous Washington schemes ever cooked up — “Fast and Furious,” part of the larger “gunwalking” plot to supply Mexican drug cartels with high-powered firearms that could then be tracked to top narcos, even though there were no electronic markers to follow.

Plus, President Obama kept an ultra-open border, so naturally those firearms would likely reappear in the US and be used against American citizens — like Border Patrol Agent Brian Terry (pictured) who was killed in a 2010 Arizona shootout with drug smugglers with two Fast & Furious assault weapons at the crime scene.

On June 7, the House Oversight Committee held a hearing, Fast and Furious, Six Years Later on a website that has written witness testimonies and a video of the whole hearing. The new report is available on another page: COMMITTEE RELEASES FAST & FURIOUS REPORT: OBSTRUCTION OF CONGRESS BY THE DEPARTMENT OF JUSTICE

Senator Grassley’s 17-minute testimony presented the six-year history of lies to Congress and the struggle to ferret out the truth — an impressive statement of how difficult it can be for the legislature to perform its oversight function. Read the text here.

Fox News had a shorter report on Wednesday:

BRET BAER: An absolutely blistering report tonight out saying the Obama administration in general and former Attorney General Eric Holder in particular repeatedly lied to the family of a slain Border Patrol officer about the weapons used in his death and stonewalled efforts to get at the truth. Correspondent William La Jeunesse tonight on Operation Fast and Furious.

MRS. TERRY (MOTHER): My only goal was to make sure he was laid to rest with honors. That honor has been insulted by cover-ups and deception by the very people he served.

SENATOR CHARLES GRASSLEY: The department’s belated admission that those 64,000 pages were not privileged puts the gold seal of authenticity on the House’s bipartisan vote to hold the Attorney General in contempt

LA JEUNESSE: Emails contained in the House Oversight Committee’s report show top officials knew the ATF sent guns to Mexico even before Terry’s death. “It’s a tricky case, given the number of guns that have walked,” said a Deputy Attorney General. A colleague replied, “It is not going to be any big surprise a bunch of US guns are being used in MX, so I’m not sure how much grief we get for ‘guns walking’.”

Months later, two of those guns were used against Agent Terry, a fact denied to Congress and Terry’s family.

MRS. TERRY: Only one possible motivation remains for all of those involved who have covered up Fast and Furious — that is to conceal their own shame and disgrace.

LA JEUNESSE: Even the Border Patrol which sent Terry’s team into the desert didn’t know about the operation.

ROBERT HEYER (COUSIN) : I believe that if Brian Terry and his team had known this information, chances are Brian would be alive today.

LA JEUNESSE: Lawmakers noted no one from the ATF or Justice Department was fired or seriously disciplined for the cover-up.