How can we blame this on white people?

Just before dusk on a muggy night in late June, an SUV crept toward a crowd waiting outside a fast food joint on an otherwise quiet commercial strip in South Shore.

A hail of gunfire followed, striking six people before the shooter was whisked away in the passing vehicle.

“They knew who they were looking for,” remarked one person at the scene in the 2000 block of East 71st Street, where fresh blood spatters painted the sidewalk.

While police say the shooters were targeting members of a rival gang, 23-year-old Kristina Grimes — a bystander apparently caught in the fray — was the only one killed, her body riddled with six bullets.

About two hours after the shots rang out, an alarming dispatch pierced through police radio: Another mass shooting had just rocked the Marquette Park neighborhood, roughly six miles away.

Three alleged gang members had sprayed bullets at a crowd hanging out in the 6200 block of South Artesian Avenue, enjoying the summer night. Twelve people were hit, among them Nyoka Bowie, 37, who suffered a fatal gunshot wound to her chest. Like Grimes and many other victims of mass shootings — defined by the Sun-Times and some researchers as incidents in which four or more people are wounded — she apparently was not the intended target.

In both cases, there was a large number of witnesses and surviving victims, yet no arrests have been made. That is all too common in Chicago, where police say they do not prioritize the cases despite the especially harsh toll such shootings have on a community.

Only one person has been charged in any of the at least 39 mass shootings so far this year, according to a Sun-Times analysis of city data and court records.

That amounts to charges in just 2% of this year’s mass shootings — far below the police department’s dismal 13% clearance rate for shootings overall, which is the lowest of any big city in the nation.

Going back to 2016, the alleged shooters have been charged in just 21 of at least 212 mass shooting incidents — or less than 10% of the cases, the Sun-Times analysis found.

Just two men have been convicted in those attacks, which through Friday night have wounded 1,032 people, 126 of them fatally, records show. Two of the other 21 people who have been charged were ultimately found not guilty, while another suspected shooter had his case dropped, records show. 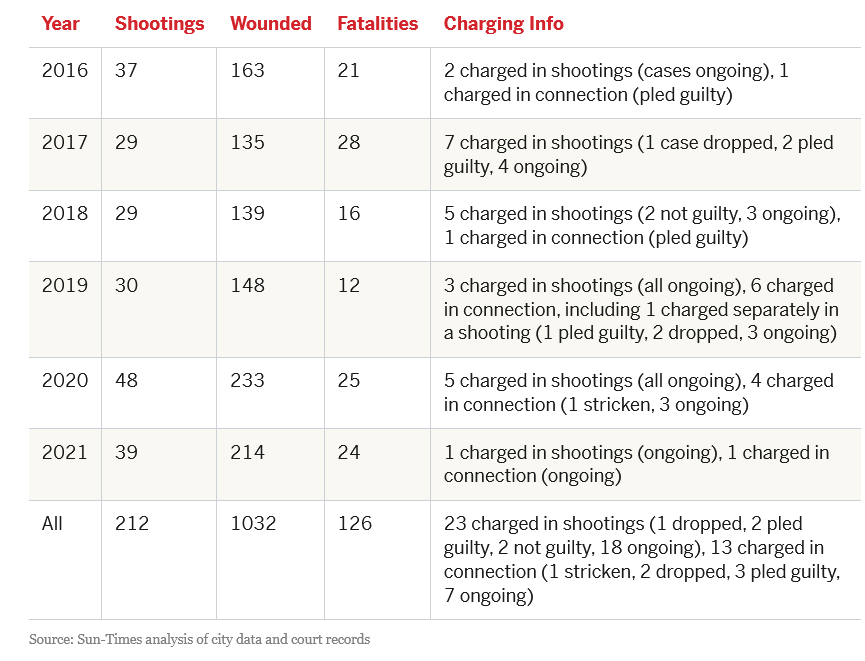 The lack of charges this year is all the more ominous because the number of mass shootings far outpaces each of the last five years, according to the Sun-Times analysis.

This year’s toll through the end of July already surpasses the total number of mass shootings recorded each year between 2016 and 2019, records show. In each of the last two years there were five attacks in which more than 10 people were shot, including a pair of shootings that each wounded 15 people.

The lack of justice in the cases leaves the most reckless shooters out on the streets — and gives neighborhood residents all the more reason to look over their shoulder as many emerge from pandemic lockdowns.

“Go to the parks on the South and West sides on a beautiful day, and you’ll see it. There’s hardly anyone there,” said Steve Gates, a social worker who works in the Roseland and West Pullman neighborhoods for Chicago Beyond. “These are our public spaces, where we should gather. But people have to feel safe.”

The Chicago Police Department’s efforts to crack cases have long been hampered by its strained relationship with the communities ravaged by gun violence, areas that have been over-policed and are predominantly Black and Hispanic. In those areas, fear of gangs and distrust of police has created an atmosphere that discourages cooperation, or snitching, striking fear in residents who may otherwise help investigators.

Seriously, how can we blame this on white people?