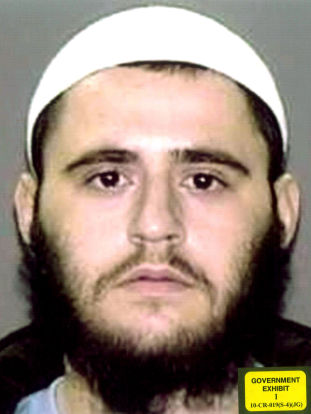 A Brooklyn federal courtroom was clownified on Friday as an immigrant jihadist warbled a little Islamic ditty to celebrate his murderous religion and invite the judge to join up.

The singer, also known as Adis Medunjanin (pictured), 28, was being sentenced to life in prison for plotting to blow up subway cars jammed full of Americans, after being found guilty of the crime last May.

Interestingly, Medunjanin is himself an American citizen, having come here at age 10 from Bosnia with his parents. He graduated from Flushing High School but was not impressed by America’s generous welcome or its western system of law and society. So he traveled to Pakistan along with two school pals, Najibullah Zazi and Zarein Ahmedzay, hoping to join the Taliban and kill US soldiers. They ended up at an al Qaeda camp where they were convinced to return to Queens and murder on American territory.

It’s noteworthy that if the Bosnian were an illegal alien, he would be a perfect Dreamer, having lived for much of his young life in this country, supposedly absorbing our culture and values. Except assimilation didn’t happen at all. Medunjanin hates everything about this country, having cooked up an Islamist-leftist stew in his mind of despising both infidels and capitalism.

Weren’t Bosnians supposed to be the “moderate Muslims”? — a category now apparently as realistic as unicorns, given instances of actual behavior. Muslim immigration is a bad policy, dangerous to public safety and national security, and should be stopped.

It’s too late to sing a sad song now.

The Queens man who trained overseas with al Qaeda and plotted a suicide bombing on the city’s crowded subway system sang Koranic verses in open court today as he was sentenced to spend the rest of his miserable life in prison.

Bearded terrorist Adis Medunjanin, 28, broke out in song as he, defense attorney Robert Gottlieb and federal prosecutors stood at the foot of Judge John Gleeson’s bench in Brooklyn federal court.

In fact, Medunjanin wearing a black suit and white dress shirt, announced his intentions to Gleeson.

“I would like to be praising God in Arabic,” he said. “As a Muslim, it is my duty to invite you into this great religion.”

After singing prayers in Arabic, Medunjanin read verses from the Koran in English as his parents, sister and extended family members watched from the gallery.

He then launched into a verbal assault on the US and blasted its foreign policy and overseas wars, condemning torture and mass killings.

“I ask you, what is democracy? What kind of system endorses torture? I ask you, is this really the best system that humanity has ever produced?”

He also criticized the very wealthy and questioned why so many suffer from hunger in the world.

“I would like to ask, in what kind of world are we living – full of hate and lies? The rich keep getting richer. The poor keep getting poorer. Oppression is on every corner. I ask you, where is the peace?”

“I ask all the people who worship the money: When we die, can we bring the money with us? We have so much food, we could feed all the world.”

He showed no remorse for his actions and defiantly insisted, “I had nothing to do with any subway bombing plot or any plot whatsoever and I will appeal this decision,” referring to his conviction on May 1 on conspiring to use weapons of mass destruction, conspiring to murder US military personnel overseas and a slew of other terrorism-related charges.

Gottlieb said Medunjanin was a “happy,” “smart” boy with a “promising” future, but became more religious as he grew older and was disturbed by seeing violence, such as drone strikes, against Muslims in the Mideast.

“This young man was caught in the face of total helplessness,” he said
Gottlieb did his best to paint Medunjanin as harmless, saying, “They [his parents] do not see their son as a dangerous terrorist.”

However, federal officials have long regarded Medunjanin’s twisted plot as the biggest terror threat on US soil since 9/11 and Gleeson agreed.

“That plan was to convert many New Yorkers’ worst nightmares into a reality,” the judge said, adding that he was “looking for some glimmer of recognition on [Medunjanin's] part of how atrocious these crimes were.”

Gleeson also noted that before Medunjanin, a US citizen, embraced his radical jihadist philosophies, he was “every much one of our own.”

The judge noted that Medunjanin was angered and frustrated by seeing American troops kill Muslims oversea, but said there were other ways of reacting to government policies one abhors.

“There’s a Grand Canyon between that observation and heading to Afghanistan to kill innocent soldiers and heading back to American to kill fellow citizens,” Gleeson said.

Loretta Lynch, the US attorney for the Eastern District, later hailed the stiff sentence, which carried additional years for additional charges.

“Justice demanded a sentence of life for this al-Qaeda operative, who was dedicated to mass murder and destruction in the New York City subways. Scores of innocent New Yorkers would have been killed or maimed had Medunjanin succeeded in his plot,” she said in a press release.

Medunjanin and two cohorts, who were also busted and have since flipped and cooperated with the feds, had planned to carry out coordinated attacks on packed platforms in Grand Central Station during the Muslim holiday of Ramadan in September 2009.

The initial blast would have obliterated anyone in the bomber’s vicinity, as shrapnel and shredded pieces of the mangled subway cars sliced through countless others, an FBI explosives expert previously testified.

Medunjanin’s bizarre behavior today in court was similar to the jihadist chant he bellowed upon being arrested.

On Jan. 7, 2010, after investigators searched his apartment, he hopped into his Nissan Altima and sped onto the Whitestone Expressway, hitting speeds of 90 mph.

He then called 911 from his cell phone and shouted, “This is Adis. We love death more than you love your life.”

In a desperate bid to kill himself and others, he crashed his car into another vehicle at the Bronx-Whitestone Bridge. The accident only caused minor injuries.

Once collared, he copped to the deranged plot and asked to be traded back to the Taliban, prosecutors have said. He also reaffirmed his love for deceased al Qaeda mastermind Osama Bin Laden.

Back in May when the jury foreman announced nine verdicts of “Guilty,” Medunjanin, a former Manhattan building worker, seemed to pray as he held his hands out in front of his body.

Born in Bosnia, the terror plotter was a young boy when he and his parents immigrated to the US to escape ethnic cleansing as civil war ravaged the former Yugoslavia.

He grew up in Queens, went to Flushing HS and graduated from Queens College with a bachelor’s degree in economics.

As he grew older, Medunjanin adopted a philosophy that American foreign policy in the Middle East had led to the persecution of Muslims, his defense attorney Robert Gottlieb has previously said.

Medunjanin had intended to go to Afghanistan in 2008 and join the Taliban, but instead al Qaeda spotters in Pakistan recruited him and two former classmates, Brooklyn federal prosecutors have said. The spotters knew that the trio’s US passports would allow them to easily cross the US borders despite tighter security in a post 9-11 world.

The al Qaeda operatives urged Medunjanin and his pals to return to the US and carry out “martyrdom operations” – otherwise known as suicide attacks.

He claimed they were influenced after listening to the inflammatory rhetoric of U.S.-born extremist cleric Anwar al-Awlaki on iPods.

He, Medunjanin and third conspirator, Zarein Ahmedzay, were then tutored in terrorism at an al Qaeda training compound in Wazirstan, part of Pakistan’s western tribal region.

When Zazi returned stateside, he later testified that he built a detonator bomb, rented a car in Denver, and then drove to New York, where he and Medunjanin and Ahmedzay intended target the subway system.

But the FBI and NYPD arrested them in January 2010 before they could follow through with the deadly attacks.

Both Zazi and Ahmedzay later pled guilty and agreed to work with the feds.

Weren’t Bosnians supposed to be the “moderate Muslims”? — a category now apparently as realistic as unicorns, given instances of actual behavior. Muslim immigration is a bad policy, dangerous to public safety and national security, and should be stopped.