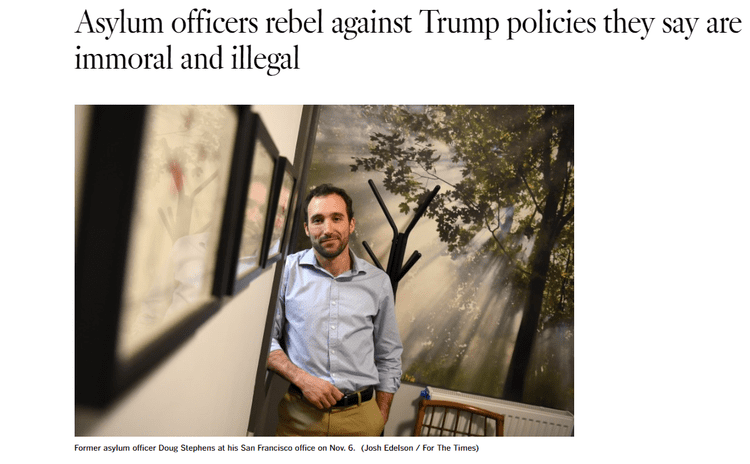 Shut Down The Refugee, Asylum, and International Operations Directorate Of USCIS—They're On The Other Side

Shut it down! Not ICE, not ICE SVU, but the Refugee, Asylum, and International Operations Directorate (RAIO).

RAIO is a sub-component of U.S. Citizen and Immigration Services (USCIS), the component of the Department of Homeland Security (DHS), that is charged not with servicing aliens, but with adjudicating applications for benefits, whether naturalization, legal permanent residence, asylum, or refugee status. However, there is a problem with USCIS, something I warned President Trump about long before he was elected. I warned that the Deep State Resistance in USCIS would attempt to sabotage his immigration policies, and my prescient warning has been proven true time and time again. [President Trump Will Have Foes In Immigration Bureaucracy—But Also Friends. They Can Help Him Win, by Federale, VDare, April 25, 2016] It seems so long ago, and if my warnings had been heeded, President Trump would be in a stronger political position today. But his inaction has led to widespread insubordination and sabotage at all levels of USCIS, especially in the RAIO, the office which adjudicates applications for asylum and refugee status, executed by Asylum Offices and Refugee Officers. They apparently think they are above the law. It is time for President Trump to show them who is boss.

First, the details, Asylum and Refugee Officers are in open revolt, ignoring the law to implement their own personal agenda of open borders for gang members, welfare cheats, and terrorists, all in the name of replacing the historic American nation.

US immigration officials, including asylum and refugee officers, were told Thursday that they would be fired for leaking information to the media, according to an email sent to staff and obtained by BuzzFeed News.

The new acting director of US Citizenship and Immigration Services, Mark Koumans, sent the email to employees, telling them that as they regularly handle sensitive information, they need to guard it closely.

“We have the responsibility to protect the information that the agency and the public have entrusted to us and it is imperative that we not betray that trust through the unauthorized disclosure (‘leaking’) of any such information,” he wrote. “…recent unauthorized disclosures of sensitive, for official use only, and internal use only information by USCIS personnel to media outlets have brought this issue to the forefront.”

[A Top US Immigration Official Threatened To Fire Employees For Leaking Information To The Media, by Hamed Aleaziz, BuzzFeed, November 21, 2019]

Now immigrant Hamed Aleaziz is all agog about the threat to discipline leakers, as if leaking was legal. It’s not, it is illegal. And when used for a partisan purpose, it is furthermore a violation of the Hatch Act, the statute that prohibits partisan political activity by Federal employees.

Sadly though, USCIS has only a slap on the wrist for first and second offenses, termination is only available for the third offense.

And these leaks are both illegal on the face, but also motivated by illegal partisan motivation by the insubordinate employees.

“It’s ironic that the acting director would send such a message. Perhaps USCIS personnel are only following the president’s example, such as when he loudly discussed sensitive information with an ambassador over an unsecured phone,” the official said, referring to Trump’s conversation with Ambassador Gordon Sondland about a potential Ukranian investigation into the Biden family. “As for recognizing the rights of employees to disclose wrongdoing under the Whistleblower Protection Act, given the treatment of the current whistleblower by the president, what USCIS employee would be willing to jeopardize their safety by disclosing wrongdoings of this administration via formal channels? Employees have no other option than to covertly disclose rather than jeopardize being ‘outed’ and destroyed by the president.”

Note that the President is the ultimate classification authority for classified information and can release any other information as is his wont. These partisan saboteurs are just angry that policies they object to are being implemented. And none of these policies they object to is illegal. Remain in Mexico is the law, all applicants for admission to the United States from a land border, i.e. Mexico or Canada, who are excludable, must wait for their immigration hearing in Mexico or Canada.

Another USCIS official said the leaks have been a direct result of the agency’s implementation of controversial policies.

“I feel like there were no leaks before USCIS started doing super-sketchy things,” the official said. “I have zero confidence in this administration and whistleblower protection.”

But this is not all, it gets worse:

It took Doug Stephens two days to decide: He wasn’t going to implement President Trump’s latest policy to restrict immigration, known as Remain in Mexico. The asylum officer wouldn’t interview any more immigrants, only to send them back across the border to face potential danger.

As a federal employee, refusing to abide by policy probably meant that he’d be fired. But as a trained attorney, Stephens told The Times, the five interviews he’d been assigned were five too many. They were illegal.

“They’re definitely immoral,” Stephens said he told his supervisor in San Francisco. “And I’m not doing them.”

A spokesman for the union that represents some 13,000 Citizenship and Immigration Services employees said Stephens is believed to be the first asylum officer to formally refuse to conduct interviews under the program officially known as Migrant Protection Protocols. But across the country — according to asylum officers, including Stephens, as well as government officials — asylum officers are calling in sick, requesting transfers, retiring earlier than planned and quitting — all to resist Trump administration immigration policies.

And there is the smoking gun, “all to resist Trump administration [sic] immigration policies. I, for one, am happy that they are quitting, good riddance to bad rubbish. But sabotaging a lawful policy is not just leaking, but insubordination. Here is an old Management Directive with Table of Offenses and Penalties. It includes the authority to immediately terminate such insubordination. It is time for Acting Secretary Chad Wolf and Acting Deputy Secretary Ken Cuccinelli to take action. First, they should immediately reform the RAIO from one of service, to one of enforcement. The clear obstacle to reform of RAIO and the source of the indiscipline among Asylum and Refugee Officers is the head of the RAIO, Jennifer Higgins, Associate Director, RAIO, USCIS.

Higgins should be immediately fired for fostering and allowing the development of an insubordinate culture in RAIO. She should be the example for the rest. And if they don’t come around, others should be on the chopping block in management at RAIO.

Renaming RAIO should be among the next steps. I suggest naming it the International Investigations Directorate (IID). This would cause apoplexy among the globalist leftists who dominate USCIS and RAIO. The current mission statement of RAIO is oriented to service rather than immigration enforcement:

We provide immigration, protection and humanitarian services for people who are:

We protect national security, combat fraud, and prevent ineligible individuals from immigrating to the U.S. through careful screening, vigilant reviews and sound adjudications.

We protect the American people through investigating fraud and national security threats to the United States in asylum, refugee, and international application systems.

To further adjust the attitude of the cadre at RAIO, or IID as I propose, Asylum and Refugee Officers, both current and future, should be required to complete a full course of training that includes arrest, firearms, and fraud detection. Currently Asylum and Refugee Officers only complete adjudications training that endorses a liberal attitude to refugee and asylum applicants.

This Tweet by Mickey Kaus and Mark Krikorian tells you what the current culture of asylum officers is:

I did not realize that. Explains a lot (like why it is so hard to lower the very high percentage of asylum seekers winning "credible fear" determinations) https://t.co/07kvVJVHpQ

Asylum and Refugee Officers should also be required to make arrests and process for removal all fraud cases they find, not hand off processing to U.S. Immigration and Customs Enforcement, Enforcement and Removal Operations (ICE ERO). This is to make Asylum and Refugee Officers do enforcement, which many will not want to do, and will quit before they have to make arrests. This is similar to that advice I gave on how to reshape USCIS. [Taming U.S. Citizenship And Immigration Services, by Federale, VDare, December 17, 2016] The quickest way to purge IID of insubordinate leftists would to make them start wearing a uniform, a uniform based on the Border Patrol green uniform.

This is also justification for a comprehensive investigation of USCIS and RAIO. President Trump should immediately order the Inspector General of DHS to begin a leak investigation into RAIO and require that all Asylum and Refugee Officers be given a polygraph examination as to any involvement in leaks.

It is time for President Trump to break the back of the resistance. He just fired the Secretary of the Navy, now fire Jennifer Higgins, among others. Personnel is policy!