Of course, the social conditions in Central America have always been the same, poor, nasty, and brutish. There have been no changes.

What has changed is the foolishness of Americans who will accept any lie from a poor brown person. And the fraud has been exposed. The claims of oppression from illegal aliens from Central America are lies. Lies because the illegal aliens flooding the border need a cheat sheet to remember to give the correct answers in claiming asylum in the United States.

This Is a ‘Cheat Sheet’ Found at the Border to Coach Illegals on How to Stay in the U.S. 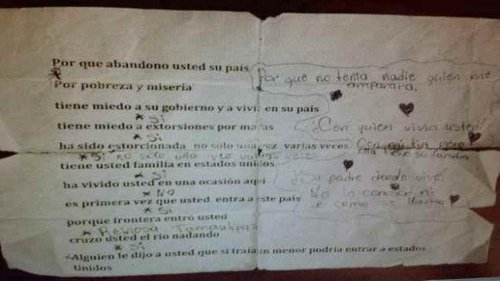 U.S. law enforcement officials have been finding “cheat sheets” along the border used by illegal immigrants to try to stay in the United States and not get deported after they’ve been caught.

The notes, believed to be supplied by human trafficking groups, give pointers in Spanish on what immigrants should say when confronted by border authorities.

A copy of one sheet obtained by TheBlaze lists a series of questions that U.S. authorities will consider in granting someone an immigration hearing.

“It’s proof they are told what to say,” a Department of Homeland Security official told TheBlaze. Often times, the sheets get “destroyed or thrown away before illegal aliens are apprehended.”

It also proves the illegal aliens have very low IQs and will not be contributing to this country because of their stupidity. If you can't get these questions correct without a cheat sheet, you aren't going to be able to be anything more than a welfare cheat.