Sheldon Adelson: "No Palestinian Nation." Or An American? 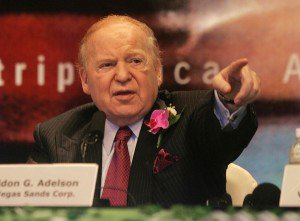 S Adelson: History is what I buy it to be

Generally speaking the Left blogosphere displays only simplistic jeering hatred for Sheldon Adelson. It is only inadvertently that Sheldon Adelson Gets a Free Pass for Bigotry By Maysoon Zayid The Daily Beast May 30 2013 contributes fresh knowledge to this existential threat to America.

Maysoon Zayid is an America-born Palestinian. This apparently gives her some license:

Adelson’s nastiness was on full display this week at the Israeli Tourism Conference. After receiving some trumped-up honor, he decided to entertain reporters with the same old song and dance about Palestinians not existing…While he insists Palestinians are as imaginary as the Easter Bunny, he is still convinced that they are also all trying to kill him and his tribe.

This is the man who is the patron saint of the Israeli Birthright trip. Adelson believes adamantly that a Jewish kid from Brooklyn has more of a right to live in Jerusalem than a so-called Palestinian who was born there. Well, it warms the cockles of my heart to know that a slew of the girls on his Birthright trips skipped reconnecting with their Israeli roots in favor of banging Palestinians who were actually born there.

I doubt extremely that an American with a British surname would have been permitted to write so vitriolically about an Adelson or Taglit Birthright Israel.

Zayid links to article from The Atlantic Who Is Sheldon Adelson, the Gingrich Super PAC's Billionaire Backer? Molly Ball Jan 25 2012 which in turn links to (Not quite so) right Steve Friess Las Vegas Weekly Thu, Sep 11, 2008 which does supply evidence I had not seen before (and I’ve been looking!).

Adelson is actually a liberal. No, really. He said so. I know because, last January while I was interviewing the CEO of the Las Vegas Sands Corp. …he said so. We were talking about his efforts to build a casino in Massachusetts, and he spoke highly of his interactions with Massachusetts Gov. Deval Patrick. When I remarked that the Democratic governor with strong ties to Barack Obama seemed an unlikely bedfellow for a man like Adelson, he pushed back.

“I’m a social liberal,” he told me. “I’m socially very liberal. Too liberal.”

Confronted with this statement, Friess used his brains

At first, like you, I thought to myself, “Yeah, right.”… But then I started thinking about it a bit, thinking about what Adelson says and to whom he gives those huge sums of money. And I realized that there are two defining political issues that land him on the Republican side of the aisle but do not necessarily make him a conservative ideologue and religious fringeist in the mold of, say, Sarah Palin.

Adelson cares about two major things—fighting labor unions and protecting the state of Israel. Those are the issues…that inform his political donations…

To whom don’t you see Adelson handing out large sums? Groups trying to ban abortion or same-sex marriage. Groups hoping to convince the public that man-caused global warming’s a hoax. Groups working to build anti-Mexican fences or line our borders with gun-toting vigilantes.

Adelson’s subsequently more pronounced enthusiasm for Amnesty might stem from his unquestionable membership of the Cheap Labor Lobby. Or perhaps, as with the Palestinians, he denies there is an American nation. In this he would have company Either way, his influence is contributing to disaster for Americans and for the GOP (except, perhaps for their consultants).