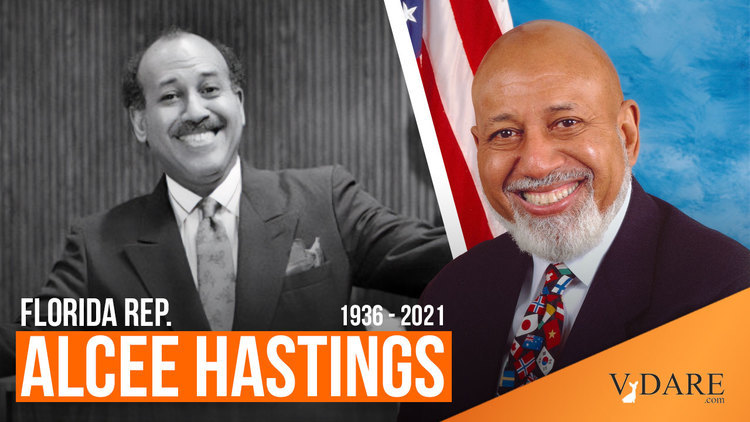 Someday, the white man will lose his chokehold on power in America and be replaced by People of Color. If you want to know what that glorious age will be like, we can study the careers of pioneers like Rep. Alcee Hastings:

From the Washington Post’s obituary:

Rep. Alcee L. Hastings, a charismatic civil rights lawyer who became Florida’s first Black federal judge, was impeached on corruption charges and made a remarkable comeback as a liberal Democratic member of the U.S. House and the dean of his state’s congressional delegation, died April 6. He was 84.

… A pathbreaking jurist and politician, Rep. Hastings was appointed to the federal bench by President Jimmy Carter in 1979. He became one of Florida’s first three Black members of Congress since Reconstruction when, in 1992, he was elected alongside fellow Democrats Corrine Brown and Carrie Meek.

Rep. Hastings’s arrival in the House of Representatives was a stunning turn of events. The chamber had voted only five years earlier to impeach him, in the aftermath of an FBI sting operation and bribery investigation that made him the sixth federal judge to be removed from office.

Compared at times to the equally flamboyant Marion Barry, who weathered a drug arrest and jail sentence before winning a fourth term as D.C. mayor, Rep. Hastings went on to win reelection 14 times, …

But throughout his political career he was dogged by allegations of impropriety, corruption and sexual harassment, to which he responded with countercharges of racism. During a bitter 1992 primary battle with a White state lawmaker, Lois Frankel, he told the Palm Beach Post, “The bitch is a racist.”

He later apologized, to a point. “I called her a name,” he told the New York Times, “and I think my remarks were uncalled for, only because I used invective.” He added that he took offense that “she called me a crook, and I have no record anywhere in America of having a felony conviction. My only arrests are civil rights arrests.” In 2012, Rep. Hastings endorsed Frankel when she ran successfully for a nearby congressional seat.

In 2017, Roll Call reported that the congressional Office of Compliance approved a secret $220,000 settlement with one of Rep. Hastings’s former staffers, who alleged that he had made unwanted sexual advances.

Rep. Hastings called the allegations “ludicrous,” and a House ethics investigation cleared him of wrongdoing but chastised him for “certain conduct that is less than professional,” including comments about sex.

Facing little political opposition through the years, Rep. Hastings became what his colleague Meek once called “a folk hero” among African Americans. “He is a man who has come up against all the pressures, all the rage, the racism, all the things that Black men have come against,” she told The Washington Post in 1992.

Political analysts traced his success and endurance to a combination of personal magnetism, a gerrymandered district that included predominantly Black working-class sections of Fort Lauderdale and West Palm Beach, and attention to issues relevant to his constituents, such as funding for Head Start preschool programs.

…Rep. Hastings was a judge for the Southern District of Florida when, in 1981, he was indicted on charges of soliciting a $150,000 bribe in exchange for leniency toward two men convicted of stealing money from a pension fund. While his alleged co-conspirator, Washington lawyer William A. Borders Jr., was found guilty, Rep. Hastings was acquitted by a jury. (Borders was later pardoned by President Bill Clinton.)

Two federal judges suspected Rep. Hastings had committed perjury during the trial, and, after a three-year investigation, an appeals court committee concluded that he had tampered with evidence and lied at least 15 times to win acquittal. Acting on the committee’s recommendation, the U.S. House voted 413 to 3 to impeach him in 1988. The Senate convicted him the next year in a 69-to-26 vote that removed him from the bench.

Rep. Hastings had long insisted that he was innocent, saying he had been “set upon by . . . warlocks.”

In case you are wondering, the Washington Post does not clarify Rep. Hastings’ meaning.

…He instead launched an unsuccessful campaign for Florida secretary of state in 1990. Two years later, he was elected to represent the state’s newly created 23rd Congressional District. His campaign received a boost from U.S. District Judge Stanley Sporkin, who — weeks before a Democratic primary runoff that effectively secured Rep. Hastings’s victory — overturned his conviction in the Senate.

Rep. Hastings, Sporkin concluded, should have been tried by the entire Senate, rather than a 12-member panel. Ruling in 1993 on a separate case, the U.S. Supreme Court found that impeachment proceedings were not subject to judicial review, effectively upholding his conviction.

By then he was in Congress, where his removal hovered over his tenure even as he tried to reinvent himself as a collegial, hard-working legislator. When Democrats regained the majority in 2006, he was passed over for the chairmanship of the Intelligence Committee, amid criticism that he was not fit for the position.

Rep. Hastings responded in typical fashion. “Sorry, haters,” he wrote in a statement, “God is not finished with me yet.”

… He was expelled from Howard University Law School for what he called “non­seriousness of purpose” before receiving a law degree in 1963 from Florida A&M University.

While in Congress, Rep. Hastings drew scrutiny for his spending habits, including the use of taxpayer money on trips abroad. In 2012, the non­partisan watchdog group Citizens for Responsibility and Ethics in Washington reported that he had paid Patricia Williams, often described as his longtime girlfriend, more than $600,000 from 2007 to 2010 to work as deputy district director of his congressional office. He insisted that she was not “family” and declined to say whether they were in a relationship.

A House ethics investigation into whether he had an improper relationship with Williams was dropped last year, following the disclosure that they had been married since 2019.

He was divorced at least twice and had three children. A complete list of survivors was not immediately available. …

Post
Knife Girl: Is She a Man-Bites-Dog Story or the Result of Bell Curves?
MORE...
POPULAR TAGS