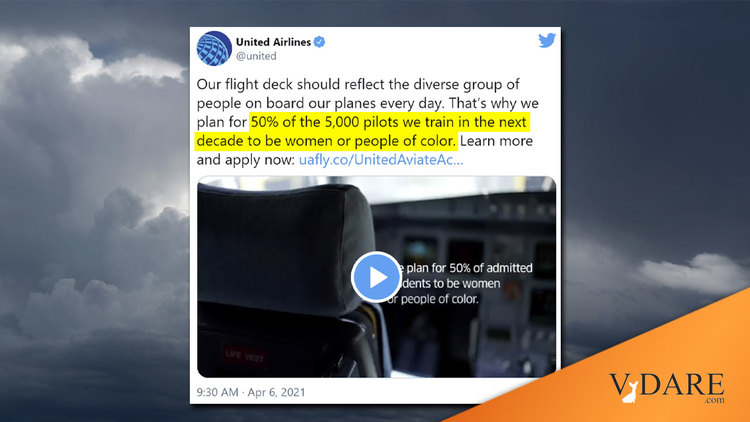 Our flight deck should reflect the diverse group of people on board our planes every day. That’s why we plan for 50% of the 5,000 pilots we train in the next decade to be women or people of color. Learn more and apply now: https://t.co/VbOFvFOksB pic.twitter.com/r0ScH6MQAJ

Generally speaking, elites take a lot of plane trips. So even at revolutionary sub-Saharan countries national airlines, they never yanked the stick from the hands of white pilots for political principles.

But American elites are getting so high on their own supply that they aren’t even fazed anymore by the increased chance of plowing into the ground at 400 mph. It’s racist to even think that lowering standards to let in more Diverse pilots might raise the risk of mass death. And, besides, real soon now robots will do all the flying, so pilots are just going to be totally symbolic, right? And what’s more important than symbolism? Ours is now the Symbolic Society where all that matters is getting more of the Good People and fewer of the Bad People in positions of respect.