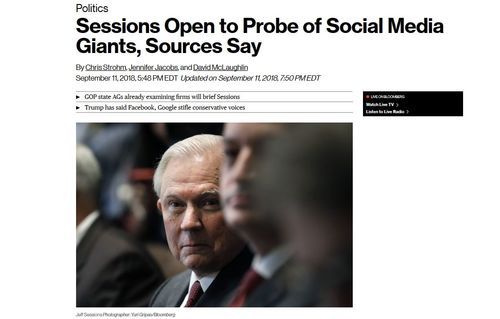 Sessions Stepping Up? Attorney General Said To Be Looking Into Social Media Probe

Attorney General Jeff Sessions has been a heroic leader in the movement to save America and the split between he and President Trump has been nothing short of tragic. Sessions has accomplished quite a lot as Attorney General. However, if this news is true and he follows up with an investigation of this kind, it may prove to be his most valuable contribution to the nation.

Attorney General Jeff Sessions is exploring a potential investigation of social media companies and will be briefed on Sept. 25 by Republican state attorneys general who are already examining the firms’ practices, according to two people familiar with the matter.

The meeting -- which will include a representative of the Justice Department’s antitrust division -- is intended to help Sessions decide if there’s a federal case to be made against companies such as Alphabet Inc.’s Google, Facebook Inc.and Twitter Inc. for violating consumer-protection or antitrust laws, the people said. They asked not to be identified discussing the matter because of its sensitivity.

Sessions hasn’t made up his mind about whether to proceed, the people said. At least one of the attorneys general participating in the meeting has indicated he seeks to break up the companies.

What is really at stake is the question of who governs America. Social media companies have an incredible amount of power not just to shape public opinon, but to shape an entire people's view of reality. All of these companies have shown not just that they are politically biased, but that they are actively engaged in shutting down any right leaning websites or activists that they don't approve of. Second only to The Wall, this is the most important issue the Trump Administration needs to confront if it is to have any chance of competing in 2020.

Luckily, another person who seems to know this is Trump's campaign chairman [Trump campaign manager says Facebook, Twitter Are Inherently Biased, Bloomberg, July 17, 2018]. Let's hope we can see some real action on this front.