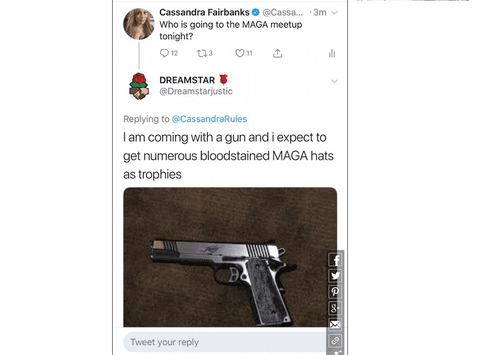 MAGA Meetups were an important part of the social life in Washington D.C. over the past year. For a while, they were one of the few institutions where people on the "Alt Right," Alt Lite, and normal conservative movement could mingle and strategize together. Of course, there was something of a deliberate effort to drive the more hardline Trump supporters out after Charlottesville, and so MAGA Meetups aren't quite what they used to be. They are smaller, tamer, and older.

Yet the Left isn't giving MAGA Meetups any credit for policing itself. Indeed, now the meetups are getting death threats.

Police have responded to the Trump International Hotel in Washington DC after an anonymous threat to shoot up a meeting there supporting President Donald Trump.

The threat was made ahead of the planned Tuesday evening event by an anonymous Twitter account that supports the Democratic Socialists, a far-left political group.

'I am coming with a gun and i expect to get numerous bloodstained MAGA hats as trophies,' the account wrote, referencing the Trump campaign slogan 'Make American Great Again'.

[Breaking News: Police are on scene of a mass shooting threat at a MAGA event at the Trump International Hotel in Washington DC, by Keith Griffith, Daily Mail, September 11, 2018]