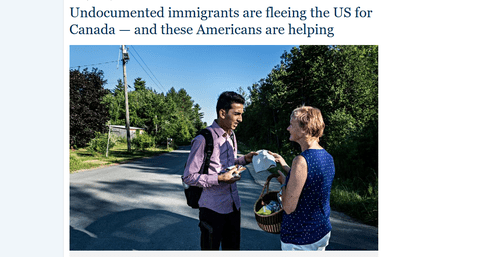 Unlawful foreigners are still fleeing from President Trump’s America, we learn from Saturday’s Washington Post. And the liberal scribblers think the situation hearkens back to slavery times, as shown by the headline, “A Modern Underground Railroad” referring to the path that once led slaves to freedom in Canada. 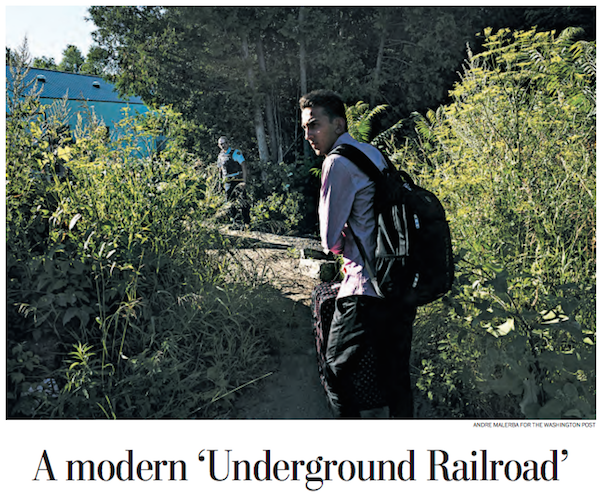 But American slaves of the 19th century were victims of a brutal system; today’s illegal aliens trying to reach Trudeau’s permissive Canada are thieves who illegally entered America to rip off jobs and benefits.

Worse, the person chosen to characterize the sob story of fleebag illegal aliens is Omer Malik, a “19-year-old native of Afghanistan.”

American soldiers are still dying in Afghanistan, but the young Afghan man profiled is motivated only to get a better deal on free stuff in the nation to the north. Why isn’t he defending his own country from the Taliban rather than angling for the best welfare system?

Unfortunately, mass illegal immigration has ruined normal patriotism and replaced it with overwhelming greed from Central America to Afghanistan. The most energetic thing young men in the Third World can manage these days is to flee to somewhere wealthy to steal First World jobs.

That’s not going to work: America cannot be the flophouse for millions of dissatisfied Third Worlders.

The sappy Washington Post article was reprinted in Stars and Stripes:

Undocumented immigrants are fleeing the US for Canada — and these Americans are helping, Stripes.com, By Tim Craig, Washington Post, August 3, 2018

CHAMPLAIN, N.Y. — Omer Malik knew he had to slip into Canada to avoid President Donald Trump’s crackdown on undocumented immigrants.

But the 19-year-old native of Afghanistan needed a friend to help guide him. He found that friend in a 66-year-old former French teacher, one of a number of people here in the Adirondack region who believe it’s their duty to comfort and support those fleeing Trump’s vision for America.

As Malik dragged his suitcase toward the Canadian border, Janet McFetridge gave him two bags of potato chips, a knit hat and — what she considers her most important gift — a hug. Then she yelled across the thicket of cattails and flowering grasses that separated them from Quebec.

“Hello,” she called, alerting a Royal Canadian Mounted Police officer that Malik was about to illegally cross the border to claim asylum. “We got someone here.”

McFetridge is part of a loosely assembled network of progressive activists, faith leaders and taxi drivers who have mobilized to help undocumented immigrants cross the northern border. To some, they’re selfless do-gooders ushering people to better lives. To others, they’re perpetuating a problem that has debilitated Canada’s immigration system.

For centuries, residents note, towns in the Champlain Valley have been a path to security, serving as an escape route for people fleeing slavery, the Vietnam War draft and Central American wars. Now, when it comes to immigration, this GOP-friendly part of New York has become a hub of the resistance.

“We view this as our Underground Railroad,” said Carole Slatkin, an advocate who has helped immigrants traveling through Essex, New York, a town that was part of a major route for enslaved people. “While no one is being flogged, and no one is being sold, there is this sort of modern-day equivalent of feeling like people are in danger.”

Advocates say they try not to give direct advice to the immigrants, instead helping them find a place to rest or supplies to ease their journey. But the image of U.S. citizens supporting immigrants who make the trip is controversial in Canada, threatening long-standing, cross-border camaraderie.

“To me, it’s just being abusive,” said Paul Viau, mayor of the township of Hemmingford, a Canadian farming community along the border. “There are people who sympathize with [the immigrants] and people who have a harder time with it. But no one appreciates that someone would pack them up and bring them to the border at an illegal crossing.”

Last year, as the Trump administration began enacting stricter policies against undocumented immigrants, Canada processed more than 50,000 asylum claims. That is more than double the claims made in 2016, according to Canadian government statistics.

Many of those immigrants have been crossing at unauthorized locations, such as here on Roxham Road.

Although the flow of asylum seekers into many Canadian provinces has slowed this year, there has been no letup into Quebec. From January through June, the Royal Canadian Mounted Police apprehended 10,261 people crossing the border illegally there. Last year, the police apprehended 18,836 people.

The arrivals have sparked a backlash from segments of Canada’s political system. In late June, Toronto Mayor John Tory warned that the influx of asylum seekers had overwhelmed that city’s ability to care for them.

“We have a problem, and we need help,” Tory told Canadian reporters in a plea for more emergency housing.

In Quebec, the leader of its nationalist party, Jean-François Lisée, has suggested constructing a wall along the southern border of the province. (Continues)