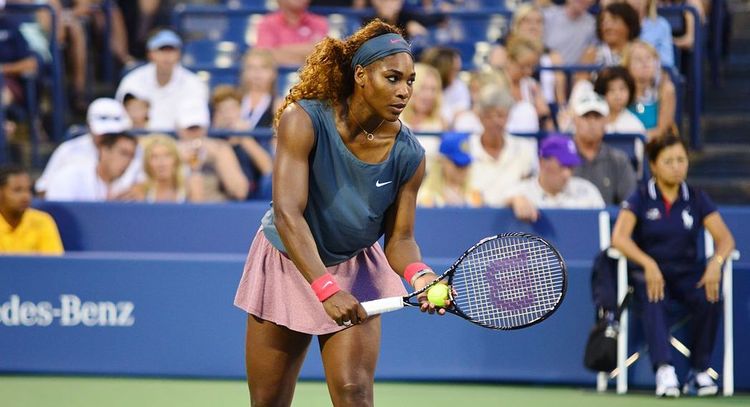 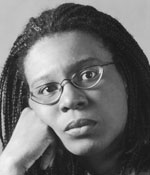 The New York Times Magazine has a giant article on tennis player Serena Williams (above) by Claudia Rankine (pictured at right) that serves as yet another illustration of my observation that while many female journalists routinely crusade on the surface against sexism, racism, etc., a close reading of their most passionate articles suggests that their highest priority in demanding a cultural revolution to overturn society’s oppressive values is that they want to wind up being considered hotter-looking.

The Meaning of Serena Williams On tennis and black excellence. By CLAUDIA RANKINE AUG. 25, 2015

Right, as you can see how black NFL defensive players never visibly celebrate after tackling somebody for just a two-yard gain. The white power structure forces black football receivers to merely hand the ball to the ref in the end zone with an aw shucks look. Similarly, LeBron James could dunk the ball, but white society thinks it’s overly abrasive to humiliate your opponents like that, so LeBron just gently lays the ball in the basket.

… Imagine that you have to contend with critiques of your body that perpetuate racist notions that black women are hypermasculine and unattractive. 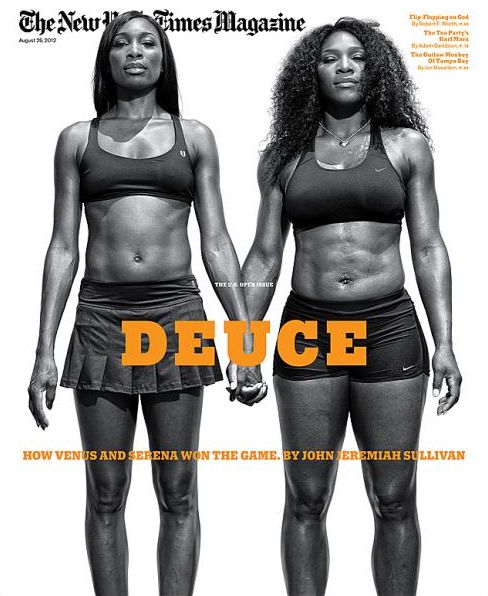 But it’s also racist to wonder if Serena’s giant muscles aren’t wholly the result of black genes. Some people, who look at Serena compared to her older sister Venus, wonder if maybe Serena represents not just black nature but advanced nurture too.

But thinking that is racist as well, so just stop thinking.

Serena’s grace comes because she won’t be forced into stillness; she won’t accept those racist projections onto her body without speaking back; she won’t go gently into the white light of victory. Her excellence doesn’t mask the struggle it takes to achieve each win. For black people, there is an unspoken script that demands the humble absorption of racist assaults, no matter the scale, because whites need to believe that it’s no big deal. But Serena refuses to keep to that script. Somehow, along the way, she made a decision to be excellent while still being Serena.

It’s like how Muhammad Ali could have exulted over the fallen Sonny Liston, but instead white culture forced him to be impassive.

Similarly, deep down Tiger Woods might like to pump his fist after making a good putt, but he knows that white country club golfers lynch blacks who get uppity, so he’s never done it (pumping his fist, that is; never making a good putt is only recent).

When Serena was a little girl, she was so timid about expressing emotions that her sister Venus once said what a miracle it was that she could summon the courage to speak at all, usually just to ask for food when she was hungry though. She innately sensed that racism was real, immanent, and suffocating. As her body grew, her emotions grew too. Tennis became an outlet for those emotions, an outlet for her humanity. Years of quiet shyness or just fear bloomed forth into an amazing athlete, no one could deny. Suddenly she started to speak, especially on the tennis court, or as her father adoringly dotes, “My little grunter.” …

She would feel what she feels in front of everyone, in response to anyone. At Wimbledon this year, for example, in a match against the home favorite Heather Watson, Serena, interrupted during play by the deafening support of Watson, wagged her index finger at the crowd and said, ‘‘Don’t try me.’’

She will tell an audience or an official that they are disrespectful or unjust, whether she says, simply, ‘‘No, no, no’’ or something much more forceful, as happened at the U.S. Open in 2009, when she told the lineswoman, ‘‘I swear to God I am [expletive] going to take this [expletive] ball and shove it down your [expletive] throat.’’

Fight the Power! Don’t the let the White Male Power Structure (embodied, in this particular case, by a tiny Asian lady) keep the Black Man and Black Woman down!

… To accept the self, its humanity, is to discard the white racist gaze. Serena has freed herself from it. But that doesn’t mean she won’t be emotional or hurt by challenges to her humanity. It doesn’t mean she won’t battle for the right to be excellent. There is nothing wrong with Serena, but surely there is something wrong with the expectation that she be ‘‘good’’ while she is achieving greatness. Why should Serena not respond to racism? In whose world should it be answered with good manners? The notable difference between black excellence and white excellence is white excellence is achieved without having to battle racism. Imagine.

Two years ago, recovering from cancer and to celebrate my 50th birthday, I flew from LAX to J.F.K. during Serena’s semifinal match at the U.S. Open with the hope of seeing her play in the final. I had just passed through a year when so much was out of my control, and Serena epitomized not so much winning as the pure drive to win. I couldn’t quite shake the feeling (I still can’t quite shake it) that my body’s frailty, not the cancer but the depth of my exhaustion, had been brought on in part by the constant onslaught of racism, whether something as terrible as the killing of Trayvon Martin or something as mundane as the guy who let the door slam in my face. The daily grind of being rendered invisible, or being attacked, whether physically or verbally, for being visible, wears a body down. Serena’s strength and focus in the face of the realities we shared oddly consoled me.

That Sunday in Arthur Ashe Stadium at the women’s final, though the crowd generally seemed pro-Serena, the man seated next to me was cheering for the formidable tall blonde Victoria Azarenka. I asked him if he was American. ‘‘Yes,” he said.

‘‘We’re at the U.S. Open. Why are you cheering for the player from Belarus?’’ I asked.

‘‘Oh, I just want the match to be competitive,’’ he said.

After Serena lost the second set, at the opening of the third, I turned to him again, and asked him, no doubt in my own frustration, why he was still cheering for Azarenka. He didn’t answer, as was his prerogative. By the time it was clear that Serena was likely to win, his seat had been vacated. I had to admit to myself that in those moments I needed her to win, not just in the pure sense of a fan supporting her player, but to prove something that could never be proven, because if black excellence could cure us of anything, black people — or rather this black person — would be free from needing Serena to win. …

I was moved by Serena’s positioning herself in relation to other African-Americans. A crucial component of white privilege is the idea that your accomplishments can be, have been, achieved on your own. The private clubs that housed the tennis courts remained closed to minorities well into the second half of the 20th century. Serena reminded me that in addition to being a phenomenon, she has come out of a long line of African-Americans who battled for the right to be excellent in a such a space that attached its value to its whiteness and worked overtime to keep it segregated.

Serena’s excellence comes with the ability to imagine herself achieving a new kind of history for all of us. As long as she remains healthy, she will most likely tie and eventually pass Graf’s 22 majors, regardless of what happens at the U.S. Open this year. I want Serena to win, but I know better than to think her winning can end something she didn’t start. But Serena is providing a new script, one in which winning doesn’t carry the burden of curing racism, in which we win just to win — knowing that it is simply her excellence, baby.