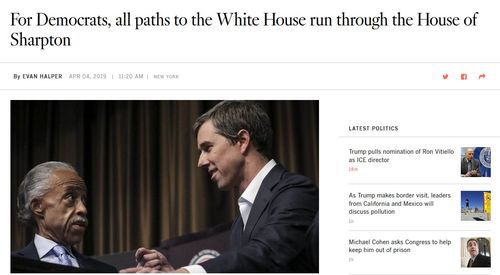 A glimpse at the guest list for the Rev. Al Sharpton’s confab here this week would surely astonish any New Yorker arriving in a time machine from the 1980s. Every major Democrat who has launched a White House bid has cleared their schedule to get in front of the Reverend.

Few things once seemed more improbable, save perhaps for the White House being occupied by Donald Trump, who once competed with Sharpton for screaming tabloid headlines and airtime on what was then a nascent medium known as “trash TV.”

… The lifelong preacher and political bomb thrower, the man New York mayors once did not want in their city, much less near their offices, says it is not he who has changed, but the nation’s politics. …

Sharpton has deftly straddled the space between insider and outsider since elevating himself to the status of major player in Washington during the Obama years, when his street cred gained him regular West Wing access.

Candidates now publicly genuflect before him…

During the Obama presidency, Sharpton was welcomed in the White House more than 100 times. …

“So if they are saying, ‘He stopped doing those things,’ not only did I keep doing them, a lot of these issues that became national concerns under Obama, I was the one leading. …

Sharpton rebuts accusations that his group is compromised by the corporate money it rakes in — Walmart and PepsiCo are among its many big donors — by arguing that King and Jackson enthusiastically partnered with such companies through Operation Breadbasket, an economic arm of the civil rights movement that Sharpton served as youth director.

The enthusiasm with which candidates seek Sharpton’s seal of approval is a favorite topic in right-wing media, which remind their audiences of his past stoking of racial tensions in cases such as that of Tawana Brawley, a teenager in Upstate New York who falsely claimed in 1987 that she was raped by four white men.

Opponents also point to incendiary comments Sharpton made amid riots in Brooklyn’s Crown Heights neighborhood in the early 1990s, when some saw his words as fomenting anti-Semitic violence against Hasidic Jews.

… Those long-ago remarks where he talked about Crown Heights diamond merchants? He argues that he was making a point not about Jews, but apartheid, targeting only area jewelers selling diamonds distributed by a wealthy South African family.