Selma Plus 50: Politics, Prose and Pictures

A big story this weekend has been the 50th anniversary of the Selma march that marked a turning point in the civil rights movement. The President made himself a big part of the celebrations, giving what passes for a pro-America speech to the assemblage and leading a walk across the iconic bridge. (One might remember his absence from Januarys Paris Charlie Hebdo march for free speech, but he couldnt have been the #1 star in that event which was filled with world leaders.)

Below, the New York Times was criticized for cropping out former President George W Bush who was also in the front line of the march. 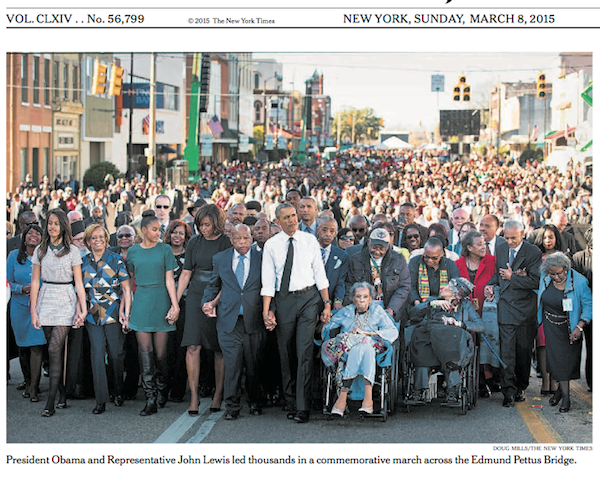 Meanwhile, the Los Angeles Times, no friend of Republicans, published a more unifying photo that included both Presidents, their wives and Rep John Lewis, a participant in the 1965 march. 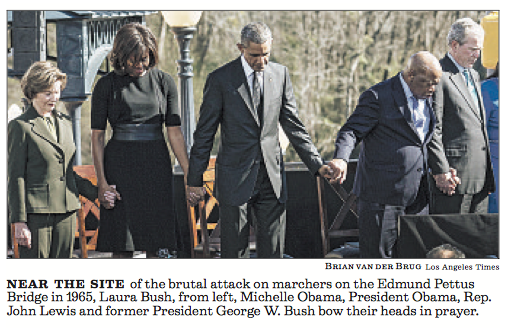 Perhaps more curious was Obamas use of the Selma celebrations to promote his extra-Constitutional amnesty for millions of foreign invaders. Professional amnesty pests hoped to co-opt the event for their unworthy goals, and BHO was on board with that effort.

Appearing March 6 on the Joe Madison radio show, Obasma pitched rewarding illegals as some sort of civil right open borders for all!

Obama: Deporting immigrant kids not true to the spirit of Selma, The Hill, March 06, 2015

Deporting illegal immigrants who came to the United States as children would violate the spirit of the civil rights movement, President Obama said ahead of his trip to Alabama to mark the 50th anniversary of the march from Selma to Montgomery.

The notion that some kid that was brought here when he was two or three years old might somehow be deported at the age of 20 or 25, even though they’ve grown up as American, thats not who we are, he said during an interview air Friday on Sirius XM’s “Urban View” with Joe Madison.

That’s not true to the spirit of what the march on Selma was about.

Interestingly, Fox News Neil Cavuto had a problem with that:

But when Obama got to Alabama, he must have second thoughts about pushing an issue that has been so harmful to black Americans, particularly economically, but also in education where black kids as well as other Americans are being pushed aside to service the illegal alien kiddie surge.

In fact, Obama did not call for millions of amnesty work permits during his Selma speech, where many of the audience were black citizens who on average have been worse off during the BHO economy. He did mention immigration, but only as part of the great sweep of American history and its diversity.

Heres a snippet from the 3600-word transcript of Obamas speech, which is typical in its snooze-worthy style of vague recycled elements:

We’re the immigrants who stowed away on ships to reach these shores, the huddled masses yearning to breathe free –- Holocaust survivors, Soviet defectors, the Lost Boys of Sudan. We’re the hopeful strivers who cross the Rio Grande because we want our kids to know a better life. That’s how we came to be. (Applause.)

We’re the slaves who built the White House and the economy of the South. (Applause.) We’re the ranch hands and cowboys who opened up the West, and countless laborers who laid rail, and raised skyscrapers, and organized for workers’ rights.

We’re the fresh-faced GIs who fought to liberate a continent. And we’re the Tuskeegee Airmen, and the Navajo code-talkers, and the Japanese Americans who fought for this country even as their own liberty had been denied.

Up with diversity! But somehow the illegal alien amnesty creating millions of legal workers to compete with citizens got shelved for the Selma audience.