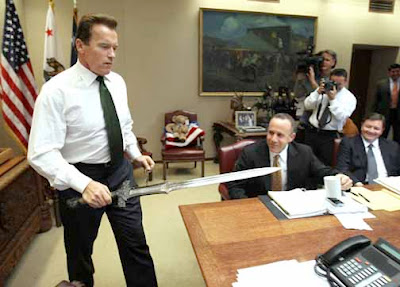 Don't look for the Governator fall on his sword anytime soon.

Faced with a $19 billion budget deficit that won”t go away, California Gov. Arnold Schwarzenegger is robbing Pedro to pay Pablo.

"SACRAMENTO, Calif. (AP) – Gov. Arnold Schwarzenegger, the state controller and treasurer decided Monday to delay $2.9 billion a month in payments to school districts and counties sooner than expected so the state can meet debt and pension obligations.

The leaders issued a joint letter notifying state lawmakers of their decision to begin withholding the payments in September instead of October.

The move reflected the limited resources the state has to work with as the impasse over California's $19 billion budget shortfall has dragged on for nearly two months.

Controller John Chiang has warned that the state could again issue IOUs, perhaps as soon as the end of August.

The Legislature gave authority in February to the three officers to delay $2.5 billion a month in payments to schools and $400 million in monthly payments to counties during October, November and December to help manage cash flow.

The step came on top of a July deferral of $2.5 billion for schools and $700 million for counties…."

Once Schwarzenegger is done robbing the schools and counties, look for a massive release of cut-throats, thieves, drug dealers and other upstanding citizens, some of whom even know some English, from California’s state prisons, making the Golden State even more vibrant than it now is. And after that, whatever state-funded services are left will be on the block. Police? Fire Departments?

Some may say that those are necessary services, but the only services that are necessary are those which primarily serve illegal immigrants, such as hospitals, welfare, and food stamps. At this rate, eventually the state will stop making pension payments, because those mostly go to a bunch of old white people.

The lame duck–and thus invulnerable–Governor has repeatedly insisted that illegal (or legal, for that matter) immigration has played no role, whatsoever, in the explosion of unpayable state deficits (see also here).