How buried in debt is California? One article tries to help us imagine what $40 billion means: [How big is California's budget hole? Try these numbers on for size, San Jose Mercury News, Jan 15, 2009].

If Gov. Arnold Schwarzenegger were to fire every employee in state government tomorrow, it would easily patch California's enormous deficit, right? Not even close.

But surely shutting down all state prisons would do the trick? That, too, would only get him about a quarter of the way there.

Now what if he were to close every prison and cut off funding for health care and other services for the poor? Now we're in the ballpark.

Schwarzenegger on Thursday to delivered his annual state of the state address, and there was only one topic on his mind: A budget deficit that's ballooned to $40 billion through mid-2010.

In 2004, FAIR published a study estimating California's annual cost for illegal immigration at $9 billion, an amount which surely has not decreased in the intervening time. But the goodies for illegal aliens are not being cut, even as basic services are being axed for citizens. The presence of millions of illegal aliens — many of whom are uneducated, unskilled and non-English speaking — is not the only cause of California's budget crisis, but it is a significant part.

Below, the increasingly ridiculous Governor recently pulled out an old movie prop from his Conan days to make a point. He was hired in a historic recall in 2003 to fix the budget, but has made the problem worse by excessive borrowing and refusal to deal with the illegal alien crisis. 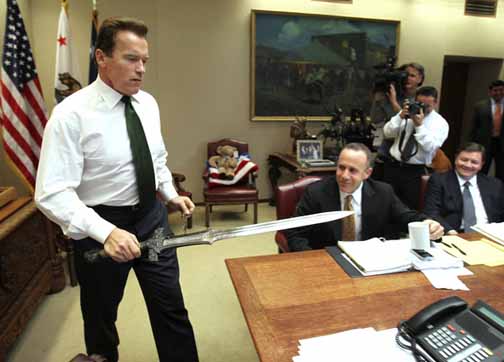 Last March, the Governator declared that illegal foreigners were not the problem: Governor refuses to blame illegal immigrants for budget problems.

Gov. Arnold Schwarzenegger called it a "big mistake" Wednesday to blame illegal immigrants for the state's looming $8 billion budget gap, just as Republican lawmakers have proposed a rollback of benefits for illegal immigrants to save money. [...]

"There is, you know, always a time like this where you start pointing the finger at various different elements of what creates the budget mess, and, you know, some may point the finger at illegal immigrants," Schwarzenegger said. "I can guarantee you, I have been now four years in office in Sacramento, I don't think that illegal immigration has created the mess that we are in."

Assembly Republicans this week promoted nearly two dozen bills they said would reduce the "negative impact" that illegal immigrants have on the state budget and border security. The proposals range from requiring individuals to show proof of citizenship when receiving state-funded benefits to repealing a law enabling undocumented students to pay in-state college tuition.

"There's a cost associated with illegal immigration whether we're in a deficit mode or not," said Assemblyman Ted Gaines, R-Roseville. "I think it just becomes more (significant) when we're in a deficit mode and we're having to make tough cuts across the board in education and health and human services. Those should be provided to the citizens of this country and people who came to this country legally."

It makes me nostalgic to recall the good old days of last spring when California was only $8 billion in the hole (or even $16 billion, according to Assembly Republicans at that time).