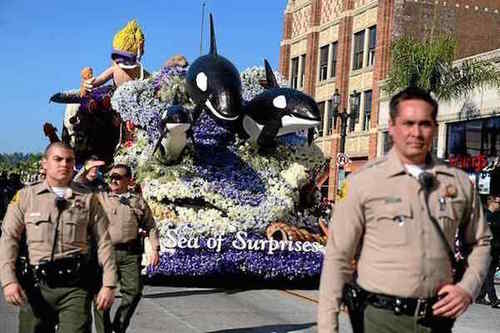 Pasadena Ramps Up Security for Rose Parade and Bowl Game

Pasadena is just a little over 50 miles from San Bernardino, the site of the December 2 jihad murder of 14 Americans at an office Christmas party, so the authorities are taking extra care to protect the public from any Muslims who may be inspired by the slaughter. Because nothing says fun to a Soldier of Allah more than the mass murder of infidels, as suggested by the 109 verses of the Koran which exhort the faithful to violence against the unbelievers.

A word one sees in news reports about security is “unprecedented” because the Rose Parade has been a safe, family-oriented event since its beginning in 1890. The late conservative radio host George Putnam rode a silver-saddled palomino for 45 years in the parade. It has become more commercialized over the years, but is still kid-friendly with its marching bands, flower-covered floats and equestrian teams.

Remember, the New Normal of extreme security has resulted from the government policy of importing millions of historic enemies of western civilization via immigration. Washington has admitted 1.6 million persons from majority Muslim countries since 9/11 — how crazy dangerous is that?.

No Muslims, no jihad. Simple. Islam cannot be reformed. It can only be quarantined.

A Reuters video reports “more than a dozen armed tactical response teams have been posted along the route, surveillance cameras, bomb-sniffing dogs and radiation-detection equipment have been brought in” and that the security costs alone will exceed $1 million:

La Times reports that attendance is down:

The Rose Parade got underway Friday amid tightened security and in the shadow of a terrorist attack less than a month ago that left 14 dead in San Bernardino.

Law enforcement officials increased security for this year’s parade but stressed there was no specific threat against the event.

“We do have strong visible presence. There is plenty of security,” said Pasadena Police Chief Phillip Sanchez on Friday morning. “We have state, federal and local officers all along the route. There are bomb-sniffing canines, rapid response teams and other less visible resources ready for anything.”

Some parade-goers said the extra measures made a difference to them.

As Sanchez spoke a federal agent stood near a stand with a bomb-sniffing dog.

“It is nice to see the dogs,” said Tom Kotter with his wife, Margie, from Cincinnati, who were attending their first parade. “It is reassuring. Obviously security is tight. How far is San Bernardino, like 50 miles?”

Elsewhere in Pasadena, people said the San Bernardino shootings were on their minds.

Angela Brown aimed to cash in on Rose Parade all-nighters with an eye-catching hand-painted wooden sign propped up in front of her home near the corner of East Colorado Boulevard and North Bonnie Avenue, an ideal spot to watch the floats drive past. Illuminated with a blinking light, the sign was hard to miss: “Parking $25. DUI $10,000.”

But by 7:15 p.m. on Thursday, only one visitor had taken her up on the offer to park their car in Brown’s front yard.

“People are afraid — not of the cold or the traffic or of the trouble finding a place to park near the parade route,” she said. “They are afraid of a cocktail of horrible stuff having to do with the terrorist attack in San Bernardino. People are wondering if it is safe or not to come to the Tournament of Roses this year. That’s sad.”

Gazing at the unusually light crowds on the sidewalk along Colorado Boulevard, she added, “This is most bizarre: there’s almost nobody here.”

A block away, Valerie Cheng, who has attended all but one Rose Parade over the last 30 years, leaned back in a folding chair and said, “Things are definitely different this year.”

Wrapped in blankets and wearing a heavy overcoat, nearby spectator Chuck Rasmussen, of La Jara, Colo., was more blunt.

“There are a third fewer people along this stretch of the parade than last year,” said Rasmussen, a retired high school teacher, who traveled to Pasadena via Amtrak. “It’s clearly because people are afraid of terrorism.”

“While I was en route on the train, passing through San Bernardino, the terrorist attack did cross my mind,” he said. “Gazing out the window, I thought, ‘This is where it happened — and it’s not that far from Pasadena.'”

“But then I came to a decision: I’m not going to let it deter me,” he said. “The Tournament of Roses is a great American institution.”

No sooner had he arrived at the parade route than Rasmussen’s wife called with pressing questions.

The increased security is due to a change in which federal officials declared the Rose Parade – along with a few other events such as the Super Bowl – as “rating 1” events where extra precautions are required.

That designation was made before the terrorist attacks in San Bernardino on Dec. 2 and in Paris on Nov. 13. But the effort is taking on added importance as officials focus more on terrorists who attack so-called “soft targets” where they can cause maximum casualties.

There will be more cameras, more monitoring devices and more personnel looking for problems. Homeland Security for the first time will use a massive scanner that can examine trucks coming into the area near the Rose Bowl. The agency will also have technology capable of tracking cellphone calls in the Pasadena area. Officials have a plan to immediately seek court warrants if they need to monitor phone activity.