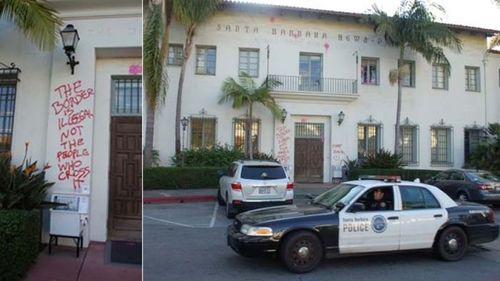 The Santa Barbara News-Press has been attacked for calling a spade a spade.  The good thing  is they aren't backing down.

A California  newspaper will continue to use the term "illegals" to describe people who enter the U.S. without permission, despite an attack on its building by vandals believed to object to the term.

The Santa Barbara News-Press's front entrance was sprayed with the message "The border is illegal, not the people who cross it" in red paint, sometime either Wednesday night or early Thursday, according to the newspaper's director of operations, Donald Katich.

The fact that the perpetrator(s) think the border is illegal tell us all we need know about him/her/them.

The attack came amid wider objections to a News-Press headline that used the word "illegals" alongside a story on California granting driver's licenses to people in the country illegally.

"The vandalism and the damage speak for itself, as well as the motivation behind it," Santa Barbara Police Officer Mitch Jan said. "At this point in time, I don't really have any suspect information. Without cameras or an eyewitness, we really don't know who would be responsible."

In addition to the writing on the building, graffiti espousing a no-borders mentality was scribbled on the walkway through Storke Placita and the sidewalk near Santa Barbara City Hall. Police were braced for a protest in front of the paper later this week. Jan said hundreds could show up, and the Police Department is aware of the call for a protest.

"There is a plan underway," he said. "There is extra staffing on board for it."

In a statement, the newspaper said it has no plans to drop its style in describing illegal immigrants.

"It has been the practice for nearly 10 years at the Santa Barbara News-Press to describe people living in this country illegally as “illegals” regardless of their country of origin," the statement read. "This practice is under fire by some immigration groups who believe that this term is demeaning and does not accurately reflect the status of “undocumented immigrants,” one of several terms other media use to describe people in the Unites States illegally.

"It is an appropriate term in describing someone as “illegal” if they are in this country illegally," the statement added.

The debate over how to label people who are in the U.S. without permission has raged at news organizations across the nation in recent years. In 2013, both The Associated Press and the Los Angeles Times banned the phrase after employing it for decades, saying it "lacked precision,"  according to Pew Research Center.

On the contrary, the AP and the LA Times banned the phrase because it is precise. It's their reporting that intentionally  "lacks precision".

FoxNews.com's policy is to describe immigrants who are in the U.S. illegally as "illegal immigrants."