Don't worry, Jeb Bush will figure out how to win the votes of these guys.  [Credit: Lara Cooper / Noozhawk photo]

Get ready for another glimpse of life in the vibrant and diverse post-American California.

An estimated 200 people converged on De la Guerra Plaza in downtown Santa Barbara on Thursday night to protest a recent headline in the Santa Barbara News-Press that referred to undocumented immigrants as "Illegals."

The demonstrators, who gathered outside the newspaper's iconic building, also stopped traffic on State Street as they marched, chanting slogans such as "News-Press, you're a mess" and "Undocumented, unafraid" in response to the headline.

Of course they are unafraid.  They have the federal government of the United States on their side, unlike actual Americans.

One of those calling for a retraction of the paper's headline was Savannah Maya, who spoke into a megaphone while encircled by supporters on the grass of the plaza.

Maya lamented the lack of a direct local media outlet in Spanish that speaks to and on behalf of the Latino community, and said that many local media outlets have a history of biased reporting and do not accurately portray a large portion of the city.

Two questions.  1) Why do they care what the English language paper says?  And 2) Why don't they start a paper?  Of course, as Steve Sailer notes, Mexicans are not known for their capacity for self-organization and institution building.

The newspaper, though decrying the immigration system as slow and bureaucratic, is sticking by the term "illegals."  For now.

Don Katich, News-Press director of news operations, sent a statement to Noozhawk earlier in the day, asserting that "it has been the practice for nearly 10 years at the Santa Barbara News-Press to describe people living in this country illegally as 'illegals' regardless of their country of origin."

Of course, the illegals have a response.

"The border is illegal not the people who cross it" and "fight back" were spray painted on the building and its sidewalks, along with the addresses of two websites — imaginenoborders.org and nooneisillegal.org.

About $1,500 worth of damage was done, according to Sgt. Riley Harwood of the Santa Barbara Police Department.

That's more damage than the #NAACPBombing (more of an #NAACPFirecrackering) the media is telling us to hyperventilate about.

Ana Becerra, who works for Santa Barbara-based social justice organization Just Communities, also spoke on the lawn, saying she was drawn into the discussion on behalf of her organization, but also took offense at the headline on a personal level.

"This newspaper serves to divide us," she said, admonishing people not only to boycott the paper, but its advertisers. "If we go spend our money there, it's shame on us."

Ah, there's the organizational capacity.  "Just Communities of Central Coast" is headed by one Jarrod Schwartz [email him] because of course. 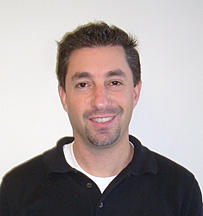 Jarrod Schwartz, the voice of the Mestizo masses

As for Program Manger Dr. Ana Becerra from the article [email her at: abecerra@just-communities.org], she has the long record of "organizing" from within Education Departments that is the usual M.O. for leftists (like Bill Ayers and his brother) to pay the bills these days.  Because she has a PhD in "Educational Leadership and Organizations" from the University of California in Santa Barbara, she knows that vandalism and screaming about abolishing the country unites us, but using the term illegals is too much.

According to her bio, "Ana's roots are in California where she was born and grew up and where her ancestors migrated to five generations ago from Mexico."  Five generations... well, so much for assimilation.

The rank and file protesters are also an interesting bunch, notably the "indigenous dance group" Kalpuli Huitzilin Ihuan Xochitl, which has a long history of participation in the usual anti-white events in the area.  The Aztec imagery is par for the course, though hopefully they have not yet sufficiently connected with their co-ethnics to be eating the hearts of their opponents as their co-ethnics in the cartels do.  Assuming these aren't just white guys who put a headdress on to be edgy.

The biggest difference between the contemporary battle over immigration and those of years past is that far fewer people are pretending that illegal immigrants somehow help the country or want to be American.  Instead, it's precisely because they despise the country and have no interest in being part of the American people that they must be admitted.  None of this is particularly surprising — we've been saying it for years.

What remains a mystery is how long Chamber of Commerce Republicans (and their stooges like Jeb Bush) can continue to pretend it will just be business as usual.