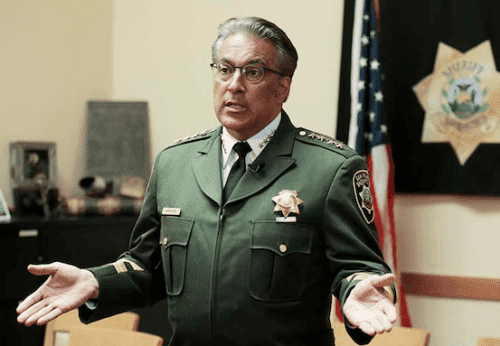 Sheriff Ross Mirkarimi was soundly defeated in Tuesday’s city election. He had recently gotten national attention for his role in releasing Francisco Sanchez, the five-time-deported illegal alien who went on shoot Kate Steinle on a San Francisco pier.

It couldn’t have been hard for even liberal San Franciscans to vote Mirkarimi out of office. He was trouble more often than not. The 2012 case of his hitting his wife (a Venezuelan telenovela star) created an ongoing drama on local news shows where the sheriff came off as arrogant jerk. He also failed a firearms test and lost his driver’s license after crashing a city vehicle. He was not a law-abiding law enforcement officer.

So voters could easily have seen the Steinle death as the last straw in a bad history of an irresponsible man who never should have been sheriff.

However the winning candidate, former Chief Deputy Sheriff Vicki Hennessy, may not offer much of a change in sanctuary policy in San Francisco, where the Board of Supervisors recently voted to affirm the protection of illegal alien criminals. Hennessy answered a reporter’s question about sanctuary after the election by saying she “may interpret it differently” — which is hardly a stirring statement in favor of law and borders.

Former Chief Deputy Sheriff Vicki Hennessy won her bid Tuesday to unseat Sheriff Ross Mirkarimi, who cast himself as an innovator in the hidebound law-enforcement community but was dragged down by a series of personal and professional controversies.

In the race to lead the agency whose primary role is overseeing San Francisco’s jails, Hennessy ran a low-key campaign that drew support from the deputies’ union and nearly every politician at City Hall. She called herself an effective manager. Mirkarimi claimed she was too much of an insider to push through needed reforms.

With all precincts reporting and most votes counted, Hennessy had 61 percent support, with Mirkarimi trailing at 33 percent. John Robinson, a former lieutenant in the Sheriff’s Department, was picking up 6 percent of the votes.

“I had so much good support and people have been so good to me and I appreciate their confidence in me,” she said. “It’s a daunting journey I will be on now, working for the people of San Francisco, but I believe I am up to it.”

The outcome matched expectations as many doubted whether Mirkarimi could come back from the litany of scandals that emerged from the department under his leadership, as well as from his personal missteps.

Before he even was sworn in, the former city supervisor’s standing in City Hall was shaken when he was charged in connection with bruising his wife’s arm in 2012. Hennessy was appointed interim sheriff as Mayor Lee fought to remove Mirkarimi from office.

Lee was quick to blame poor leadership for the department mishaps to follow, including the release of a man from jail who could have been deported but is now charged with fatally shooting 32-year-old Kathryn Steinle on an Embarcadero pier in July. The case sparked a national immigration debate.

Mirkarimi also faced questions over the death at San Francisco General Hospital of a missing patient whom sheriff’s deputies were unable to locate, allegations that deputies forced inmates to fight, theescape of two inmates, the conviction of a deputy for the unprovoked beating of a hospital patient,and the suicide of an inmate who had been brought in on a report he was going to jump off the Golden Gate Bridge.

Then there were Mirkarimi’s own troubles: a failed marksmanship test preventing him from carrying a gun and his driver’s license being suspended after a minor crash in a city vehicle.

Through it all, Mirkarimi said he was used to being the “underdog,” and that his progressive leadership was needed to bring the department forward.

At his election-night party at Puerto Alegre restaurant, Mirkarimi was reluctant to concede. In an address thanking supporters, he would say only, “We’re not in a position we’d like to be in.”

Because of Mirkarimi’s controversies, Hennessy was able to run a quiet campaign. The 32-year agency veteran said she wanted her record to speak for itself.