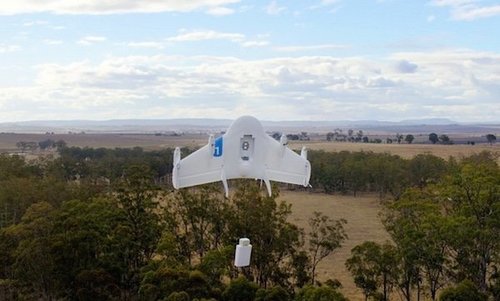 Drones are coming, no matter whether or not the citizens want their skies filled with buzzing machines dropping shoppers’ merchandise into neighborhoods. Tech elites like Jeff Bezos think drones are a cool addition to the smart machines already speeding the processing of mail-order businesses like Amazon, which has pioneered automation with its Kiva robot warehouse system.

Google has been a leader in developing self-driving cars so automated delivery drones many not be that big of a stretch.

Why is nobody discussing the safety hazard of robotic flying machines running into people? A database titled Domestic Drone Accidents reports several dozen within the US. At least one lawyer specializes in Drone Injuries, and the website includes drone crash videos. The March issue of the Scientific American had a list of injuries in a piece titled, 5 Epic Drone Flying Failures. A recent Google search for Drone Accident brought over 11 million results.

Plus, will drones cause slingshots to make a comeback among sharp-eyed kids who like to aim and shoot?

Of course, thousands of delivery drivers working for UPS and Fedex will have to find something else to do for a paycheck if drones become a big thing. America certainly won’t need more immigrant workers in the automated near-future where jobs continue to disappear and technological unemployment becomes the new normal.

Tech elites appear to have a rivalry going on to see who can have the coolest, most futurist gadget, like Mark Zuckerberg’s giant drone to beam the internet to the third world and Sergey Brin’s self-driving cars. Hazardous noisy drones for everyday deliveries sound like a terrible idea for the average person’s quality of life, but that doesn’t matter because tech leaders want it to be so.

The topic of drone delivery was discussed on Fox News Tuesday morning:

BILL HEMMER: Google wants to fly its deliveries. The Internet giant want to begin commercial package delivery by use of a drone by 2017. Melissa Frances, After the Bell on Fox Business Network, here with me — nuts-and-bolts 2017, that’s right yeah Google wants to do this?

MELISSA FRANCIS: Yeah, it’s a little over a year from now. They are already testing in Australia and they’re doing it for emergency supplies, for medical supplies. Why Australia? Not densely populated, there’s a lot of sparse areas so they can go and sort of work the kinks out but they’re doing it, I mean it’s called Project Wing and Google’s not the only one. This is coming, I mean it’s like driverless cars. It sounds impossible but you can’t stop it.

FRANCIS: Okay, so what they’re talking about right now is packages up to five pounds — that’s a lot of cat food —that’s going to be coming into your neighborhood. They revealed some of the details that I think are really interesting so they’re talking about a drone, it’s like an octa-copter, could come in and then hover, and from there Google describes a winch lowering the package down, so it’s starting to sound a little more doable. You picture it coming to your front door — I ’m sure there’s some sort of alert — and then slowly lowers the package to you. It’s not the drone coming at your head. They’re gonna be a certain altitude and then they would lower whatever it is and hover.

HEMMER: So they’re negotiating with the FAA, I can’t imagine what these negotiations are.

FRANCIS: What could possibly go wrong? They’re working with the government in order to get this to work out.

FRANCIS: I think they could eventually, I mean I think what you’re talking about in the short term is correct, that there would be a hub where they would go out and they said they could deliver up to five pounds with 30 minutes notice and get out there. It’s interesting to note that this was revealed that in air traffic controllers convention in Washington so they’re talking about the regulatory piece and logistics about what happened but I think you’re right: initially a drone comes out to a certain area, it’s a hub area, it lowers down the packages that would then go out whatever is in that area. But I think long run you look at everybody who’s in this Alibaba, Amazon, I’ve already seen their drones in action at a dinner one night they brought one out, I mean everybody is talking about doing this but it’s going to happen.

HEMMER: One more point — do you see all the issues we have at airports right now with drones criss-crossing, and these are amateurs who are doing it now. We’re gonna open up the field to many more and I think 2017 might be a little premature.

FRANCIS: I think what they’re going to do probably is they’re going to restrict who can have drones this level I mean I think the fact that the big players are getting in, the fact that you would I can go buy a drone and use it. that there’d been a very much clamp down on that so that we don’t get in the way of these commercial drones that are out there. There’s gonna be a lot more rules and regulations like if there’s a realtor in your neighborhood that’s flying a drone around to get the best views to sell a house, there’s gonna be a lot of limits on that as more of these things take to the sky.