Local reporter (and friend of illegal aliens) Matt O’Brien is talking up the high number of DREAMer “kids” located in the nine counties surrounding the San Francisco Bay — more than in all of Arizona!

Woo hoo, that’ll show the hateful border defenders — we have more lawbreakers than you! Good times for Democrats and Raza-tarians. 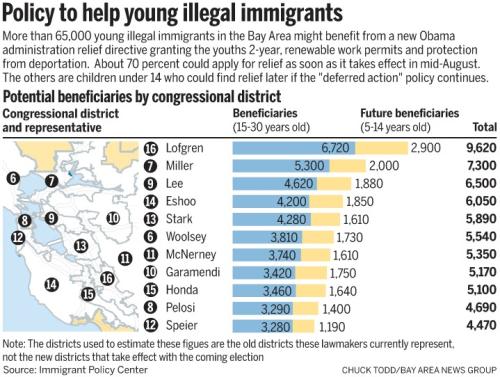 Perhaps young Americans trying to find work in California won’t mind the extra competition from tens of thousands getting an amnesty. The newbies will have the added advantage of being diverse, a much desired quality by PC employers these days.

June unemployment in the state was 10.7 percent, admittedly an improvement compared with the 12.0 percent of June 2011. Still, California remains the third-worst state for jobs, with an unemployment rate a third higher than that of the nation.

In addition, the local number of 65,000 is based on a national figure of one million, but Roy Beck estimates the DREAMers will number 2-3 million, based on Obama’s lower requirements compared with earlier versions. And that appraisal does not include the expected “fraud on a titanic scale.”

As the Obama administration readies for a rush of applications from young illegal immigrants seeking work permits, a new study predicts one of the largest contingents will come from the Bay Area, perhaps more than from all of Arizona.

And while the majority of the applicants here and across the country were born in Mexico, the Bay Area also has a large number of Asian immigrant youths who are likely to benefit from the new policy.

More than 46,000 Bay Area immigrants who are younger than 31 and were brought to the country illegally when they were children could immediately qualify for two-year, renewable work permits and protection from being deported. Another 19,000 here are children younger than 15 who could benefit when they grow older, according to the estimates by the Immigration Policy Center, an advocacy and research group based in Washington, D.C.

That’s about 65,000 young immigrants eligible for relief, more than the 53,000 estimated in the entire state of Arizona and the roughly 39,000 each in New Jersey and Georgia. California as a whole has about 30 percent of all potential beneficiaries.

Nationwide, the policy center joins other researchers in saying nearly 1 million could immediately qualify when the policy takes effect Aug. 15, but the center is the first to make regional estimates.

“They’re everywhere; they’re in every congressional district, every state,” said Wendy Sefsaf, spokeswoman for the center.

Lofgren’s San Jose-centered district has about 9,600 young immigrants who might benefit, more than twice as many as in the San Francisco district of House Minority Leader Nancy Pelosi, which has fewer Latino families and fewer young people.

Lofgren, the ranking Democrat on the House of Representatives’ immigration subcommittee, said she doesn’t know if the estimates are accurate but said she meets undocumented students every time she visits a local school or college.

“For the most part, the kids I’ve met are tremendous strivers,” said Lofgren, who supports the directive that President Barack Obama announced June 15.

“These are people who basically have lived here all their lives who are American but they don’t have their papers,” she said.

The relief directive won’t grant legal residency or citizenship but will permit the youths to work legally and will protect them from being deported.

On Friday, immigration officials said it will cost $465 to apply for the work permits and undergo a required background check. U.S. Citizenship and Immigration Services is expanding its staff to handle the rush of applications but said the policy should pay for itself.

“It’s paid for by the applicants, not by the taxpayers,” Lofgren said.

The policy center estimated the number of beneficiaries in each state and congressional district by extrapolating from census data on country of origin, age, educational attainment and citizenship and from previous government estimates of unauthorized immigrants.

Nationwide, it showed Democratic lawmakers, most of whom have been supportive of the new initiative, tend to have more illegal immigrant youths living in their districts than Republicans do, with exceptions.

Southern California Republicans Rep. Mary Bono Mack, of Palm Springs, and Rep. Ed Calvert, of Riverside, each had more than 9,000.

Nationwide, a West Virginia Democrat had the fewest expected beneficiaries in his district, about 60 people, while the most — more than 19,000 — were found in the Phoenix district of Rep. Ed Pastor, D-Ariz.

Sefsaf cautioned that the numbers are guesswork, and no one will know the true count until the government begins accepting relief applications in less than two weeks.