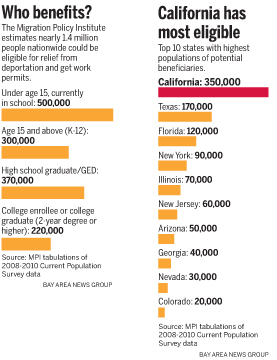 The Contra Costa Times immigration reporter tried his liberal best to present both sides of the Obamnesty, including the downer of more workers being unleashed on jobless citizens. (California statewide unemployment in May was 10.8 percent, so joblessness is a big concern here.)

But Matt O’Brien’s questionable attempt at “fair and balanced” was neither. The piece starts out with emotional stories from several young illegals and their dreams for the future. One version in the San Jose Mercury posted a sympathetic photo of one, Fiona Cruz.

For the other side, the reporter interviewed CIS’s excellent researcher Steve Camarota, and cited a couple relevant quotes. But O’Brien followed Camarota’s reasonable analysis with an immediate refutation beginning: “Those are assumptions many economists don’t hold. . .”

However, the most egregious element was the omission of young citizens who already struggle to find jobs. Why are their dreams for the future not considered worthy? How hard would it have been for the reporter to go to a local campus or unemployment office to find Americans who cannot find work?

The media constantly barrages the public with tearful stories of illegal aliens, as in this case. But young Americans, whose parents have obeyed the law and paid the taxes, are not even an afterthought to liberal journalists.

For that reason, I propose a new visa category for journalists to increase diversity in the newsroom and educate current scribblers about what the rest of America faces. Fifty thousand new journalist immigrants should do nicely for a start.

As thousands of young illegal immigrants consider openly applying for work permits under a new Obama administration directive, they dream of jobs they could never find in the shadows.

Eduardo Ruiz, of San Jose, has worked in a South Bay market since he was a teenager, but the trained artist wants to animate 3-D movies and open his own studio. Fiona Cruz, of Daly City, earned a biotechnology degree at UC Davis but is blocked from working in a science lab. Alameda’s Ju Hong bussed tables at a sushi restaurant to pay his UC Berkeley bills but would rather be drafting better government policies.

An estimated 350,000 children and young adult immigrants in California and more than 1 million nationwide could qualify for protection from deportation and temporary work permits through the new federal relief initiative announced Friday, according to the Migration Policy Institute.

How their arrival into the formal job market will affect California’s economy and employment is a mystery to many economists because nothing quite like this has ever happened before.

Many of those eligible are already working, but only because their employers don’t know or care that they are here illegally.

Giving them legal work permits — renewable every two years — will open up previously unattainable careers to people like Ruiz, Cruz and Hong.

“My dream is to start my own studio. I’ll have to hire people. That’s job creation, an investment,” said Ruiz, a 29-year-old about to graduate from San Jose State. “There will be a lot of young people graduating, starting businesses, and that will create jobs,” he said.

Not everyone is as optimistic.

The relief measure could also flood the California job market with newly legal workers competing for scarce jobs with other workers, especially native-born Americans who never went to college, said Steven Camarota, research director of the Center for Immigration Studies in Washington, D.C., which seeks to reduce immigration.

“The benefit to the illegal immigrant himself might be significant,” Camarota said. “But that raises other concerns. Unemployment is so bad at the bottom end of the labor market.”

Well-paying fields that weeded out illegal workers because of strict background checks — such as in security or parcel services — could suddenly get more competitive, he said.

Those are assumptions many economists don’t hold since most studies show illegal immigrants have a trivial effect on other workers, said UC Berkeley economist David Card.

“For various reasons, however, the spillover effects of immigration capture a disproportionate share of attention, particularly from critics of immigration,” Card said in an email.

The directive’s biggest effect will be on the beneficiaries themselves “who in the best case might be able to apply for better jobs,” he said.

Immigrant advocate Reshma Shamasunder is among those who believe empowering undocumented youths with legal jobs and freedom from deportation benefits the broader community.

Biotechnology major Cruz graduated from UC Davis in 2009 and aimed for a career in stem cell research or regenerative medicine. Unable to work in those fields, she chose activism after U.S. Immigration and Customs Enforcement sought to deport her to the Philippines.

The 24-year-old won a deportation reprieve earlier this year but has not been able to work.

The directive the Department of Homeland Security issued last week applies to illegal immigrants under 30 who came to the United States before they turned 16. They must either be high school graduates, currently in school or military veterans.The government won’t begin taking applications until mid-August.

Hong, 22, graduated from UC Berkeley in May worried about his future. The South Korea native is a longtime “Dreamer,” part of a national network of undocumented student activists who have been fighting for a federal Dream Act giving them a path to citizenship.

This short-term administrative directive doesn’t do that, but Hong said it is an important step.

“I never thought the Obama administration would allow Dreamers to have work permits,” Hong said. “It’s a huge victory.”

The political science major imagines one day working for the government, the same one he grew up fearing would deport him.