Washington’s welcoming of hostile Muslims from unfriendly nations as refugees and immigrants needs more attention, because these people can be very troublesome indeed.

In Phoenix, the trial of Iraqi refugee Abdullatif Ali Aldosary started this week for his attempted bombing of the Casa Grande Social Security office last year. 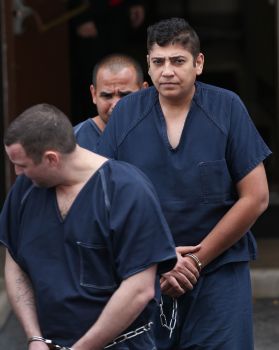 Further east, in San Antonio, another bad apple of diversity has been located. The report says the arrest is for benefit fraud, but that the Iraqi refugee Ahmed Tayyeh (pictured) has al Qaeda connections. Surely there is a bigger story here, that will hopefully be revealed in time.

Plus, the case shows how little vetting the government does on the unsavory and dangerous characters it lets in here by the boatload — 200,000 Iraqis! More Muslims. Just what we don’t need.

SAN ANTONIO — On the surface, Ahmed Khudhur Tayyeh is a refugee, resettled in San Antonio in 2008 by the United Nations to help him escape persecution in his native Iraq.

The way this region’s Joint Terrorism Task Force tells it, however, the 39-year-old is suspected of having ties to Al-Qaida.

He was arrested earlier this month on an indictment charging him — not with terrorism — but with theft from the government, defrauding the Social Security Administration out of $7,995 in disability benefits and with withholding information that he had been getting a side income.

As one of nearly 200,000 Iraqi refugees approved by the U.S. government for resettlement in America since 2007, Tayyeh was given a green card, despite giving conflicting stories about how he injured his leg. In one story he allegedly said he took a hit from an improvised bomb, in another he said he was kidnapped by Iraqi police and shot in the leg. The government here gave him disability benefits because the injury supposedly prevented him from working.

Special agent Damien Reyes, with the Social Security Adminstration’s Office of Inspector General, testified that the FBI-led task force had been on Tayyeh’s tail for about 18 months. They tapped his phone, and learned he had been wired $15,000 from relatives in Iraq, which he put in a safe deposit box, and spent some of that on personal expenses.

“Mr. Tayyeh became the target of investigation because of his suspected ties to Al-Qaida,” Reyes said.

Agents watched Tayyeh as he left his Northwest Side apartment, and during that period, went to work at Corona Food Mart on Blanco Road from December 2011 and June 2012, Reyes testified.

Tayyeh was observed cleaning the store and stocking shelves, and agents learned he got paid in cash, and had set up a bank account, but did not tell the Social Security Administration any of this, Reyes said. It would have ended his disability benefits, Reyes said.

While being watched, Reyes said, Tayyeh took indirect and unusual routes, drove erratically or the wrong way, and would pull into gas stations — not for gas, but to back up into a parking spot to wait several minutes and scan to see if anyone was following him.

“I was told this was training in counter-surveillance,” Reyes said.

Reyes’ agency pulled Tayyeh in for an interview in January 2013, and Tayyeh denied he had a side job, or any other bank account besides one to receive his benefits. In an interview this summer with the FBI, Tayyeh admitted membership in a tribe in Iraq called Al Janabi.

“He said that the Al Janabi tribe is affiliated with Al-Qaida,” Reyes testified. But “he indicated he did not follow those beliefs.”

During his arrest Sept. 6, “he admitted lying to get refugee status,” Reyes testified, and added that Tayyeh gave yet another different story about his injury.

But Tayyeh’s lawyer, Tylden Shaeffer, argued that the government erroneously painted Tayyeh as an Al Qaida operative and “bootstrapped” the uncharged terrorism accusation to convince a judge to keep him jailed.

“What’s curious…is they’ve had 18 months to look into that, and they don’t have anything,” Shaeffer argued.

Tayyeh, Shaeffer said, has made it clear he does not want to return to Iraq because he will be killed.
“We are mistreated (there), we hate fundamentalism,” Tayyeh’s friend, Falih Hutaib of Leon Valley, who is also an Iraqi refugee, testified. “I know for a fact that he hates Al-Qaida.”

U.S. Magistrate Judge John Primomo found Tayyeh is a risk of flight and denied him bond.