Salvadoran Deportees Make New Lives for Themselves at Home

There aren’t many stories about deportees and their experiences after they arrive in their homelands, so a decent follow-on article can be interesting. The LA Times’ Sunday front-pager checked in with several deported Salvadorans and the results were mixed — some are doing well and others not. 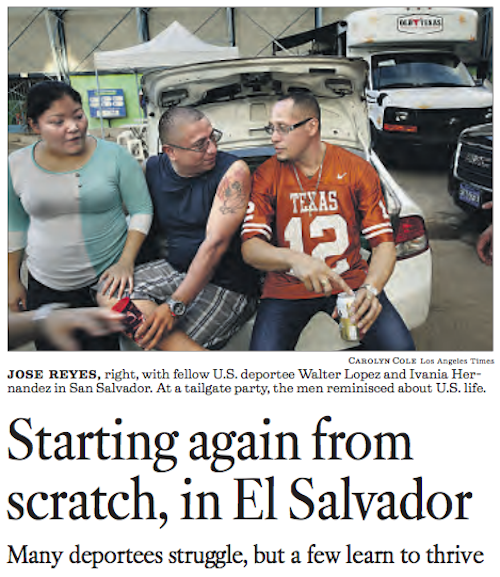 Unlike wealthy Mexico, El Salvador is poor, plus there is a lot of gang crime. Still, some of the returnees are making a go of it through pluck and luck. Companies looking for cheap labor provide one opportunity.

When I got the call to study and resist illegal immigration in 1996, the world population was around 5.8 billion. The planet’s residents now number more than 7.37 billion according the spinning Census clock. Clearly, first world nations cannot be the rescue flophouse for the world’s poor and dissatisfied: political reforms must happen around the world so every country can be a decent place to live. If there were no easy escape valve via illegal immigration, a lot more reform would surely take place worldwide.

Deported persons would do well to organize and promote policies of law and markets to improve upon the conditions they left. Social progress is unlikely otherwise.

The smell of slow-cooked Texas barbecue wafted over the outskirts of San Salvador as Jose Reyes cracked open another beer. It was Super Bowl Sunday, and Reyes had gathered with several dozen friends in a parking lot outside a stadium where the game would be screened. Dressed in baggy NFL and college jerseys, they traded jokes in English between bites of pulled pork and hamburgers.

Reyes was deported from the United States in 2001 after serving a prison sentence for wounding two people in a shooting in Houston when he was 17. His mother had brought him to the U.S. as a baby, and when he stepped off an Immigration and Customs Enforcement facility in El Salvador, he had no recollection of the country of his birth.

Now he is 39 and thriving as a manager at an English-language call center that takes questions from AT&T customers in the United States. He and his friends, other U.S. deportees also working in call centers, earn well over El Salvador’s minimum wage.

Among the Central Americans caught in a decades-long cycle of migration and deportation, Reyes is one of the more fortunate ones.

The U.S. deported 2.5 million immigrants under then-President Obama, more than any previous administration. Roughly 150,000 of those were returned to El Salvador at a time when surging violence there and elsewhere in Central America was driving more migrants into the United States illegally.

Breaking from the long-standing policy of targeting immigrants convicted of serious crimes and turning a blind eye to most of the rest, the Trump administration announced this week that all 11 million people living illegally in the U.S. are potentially subject to deportation. It also said more immigrants may be deported without a hearing or review.

That means a whole new generation of deportees could soon be returning to countries that have long struggled to absorb them. An estimated 700,000 people from El Salvador alone are living in the U.S. illegally.

Each person picked up in the U.S. and delivered back will have to forge a new life, sometimes in an unfamiliar homeland. Some will make new beginnings. Others will struggle to find work or become new soldiers — or victims — in a gangland underworld.

Influx of deportees Immigration has been a fact of life in El Salvador since the 1980s, when millions fled a violent civil war that pitted leftist guerrillas against the U.S.-backed military government.

Deportation has been a fact of life since the 1990s, when many Salvadorans, especially those who had become involved with U.S. street gangs, started to be sent home.

The gangster culture some had adopted in Los Angeles and elsewhere returned with them, and soon a different war took hold, this one involving rival gangs and police.

The violence, along with extreme poverty, has prompted new waves of migrants to leave the country. More than 400,000 Central Americans were detained at the U.S. border in the last fiscal year, many of them from El Salvador.

Many believe El Salvador is unprepared for what could be a massive influx of deportees.

“They are not ready at all,” said Salvador Carrillo, who is a deportee and is working with others to create programs to help new arrivals get jobs and government services.

“This is what the government should be doing, not us,” Carrillo said. “We came back and found a country under stress. The whole situation is very precarious here, and it’s going to get worse.”

“We have a country that is already not able to absorb its labor force,” Aguilar said. “And we have an economy that depends fundamentally on remittances from the United States.”

Others have a more optimistic view. Pablo Alvarado, a U.S. citizen who fled El Salvador during the civil war and leads the National Day Laborer Organizing Network, a U.S. immigrant rights group, is working to create employment training centers for returnees, who he believes have much to offer El Salvador.

“I think migrants are the answer,” he said.

Gang problem Juan Villegas went to the U.S. to be with his mother — and came home several years ago covered with gang tattoos.

A member of the 18th Street gang in the Los Angeles area, Villegas quickly fell in with members of his gang living in El Salvador.

His body tells the story of the violence he has faced since his return: scars on his arms and torso from being shot on two occasions by rival gang members. Deportation has meant a return to street life and a fight to stay alive. “It’s worse every day,” he said.

Most afternoons, Villegas stops by a bakery staffed by recovering drug addicts and buys dozens of boxes of fresh pastries. Then he walks the streets, selling them for a small profit.

He chooses his route carefully. “There are places where I can’t walk,” he explained.

Villegas said he was approached on the street about his gang affiliation as soon as he returned to El Salvador. “They see you’re tattooed and have a bald head and say, ‘Where are you from?’” he said.

Many calls centers won’t hire people with prominent tattoos, like the ones that creep from his forearms down to his hands. “Who’s gonna give me a job?” he said.

Currently, he is preoccupied with his teenage daughter, conceived in El Salvador after he was deported on an earlier occasion. He said she is using drugs.

He wishes he could raise her in the U.S., he said, where he has a young son.

A second chance Every Friday, Maggie Moran takes a bus to the airport in San Salvador to greet dozens of deportees arriving from the United States.

“Don’t think this is the end,” she tells them in English, pressing pamphlets for her church into their hands. “There’s more to life than just being in the States.”

It’s a lesson Moran, 45, learned after her deportation three years ago. In Oregon, she smoked and sold methamphetamine, lost custody of her kids and bounced in and out of jail. Back in her native El Salvador, which she fled when she was 14 after her father was killed in the civil war, she has found a second chance.

“I was going to die,” she said. “God knew what he was doing when I was deported.”

Not that things haven’t been hard. Moran, with her wavy, bottle-blond hair, has been harassed on the street by gang members and by police who ask whether she has gang ties. Like other deportees, she has found that the government has few services to help her.

But with the assistance of a U.S.-based Christian missionary, Moran found a job as a supervisor at a home for single mothers and their children. She also recently started at a call center.

After getting off work, Moran makes lunch for the children and reads them books as they doze off into naps.

She’s grateful for the chance to exercise her maternal instincts after missing out on years with her own children, who are U.S. citizens living in Oregon. Now, she speaks to them in video chats.

An uncertain future Mayra Machado, 31, landed in San Salvador last month. She didn’t have a Salvadoran passport and didn’t even know her native country’s telephone code.

Machado, who speaks English with a folksy Southern accent, has three young children in Fayetteville, Ark., who are U.S. citizens. She still hasn’t told them she isn’t coming back.

In the U.S., Machado made good money as an ophthalmologist’s assistant and ferried her kids between school and extracurricular activities in a BMW. She spent a year in immigration detention and was eventually deported after a routine traffic stop revealed felony convictionsfor forging a check years ago.

With no close relatives remaining in El Salvador, Machado asked to stay with family friends in Usulutan, a largely rural province lined with sugar cane fields that is home to a large “free trade zone,” where international companies lured by tax breaks can hire low-wage workers to assemble products.

It is one of the most dangerous areas of the country, with rival gangs vying for territory. At night, it’s common to hear gunshots.

The first time Machado ventured out, a gang member sidled up and asked her about the small crown tattooed on her shoulder. It was a Juicy Couture logo — a remnant of her days in the U.S. — but the gang member thought it might be a sign she belonged to a rival gang.

Afraid to walk alone, Machado now spends her days inside the family’s dark house, swatting away mosquitoes. She doesn’t know what to do next.

“I feel overwhelmed with reality,” she said, crying on a recent muggy afternoon. “Not being able to go out, how can I even start to build a life here?”

Nods to U.S. life For Reyes and his friends, game day tailgating is a part of preserving their adopted American traditions in a country where the word futbol is universally understood to mean soccer.

As the Super Bowl party wore on, they began reminiscing about the past.

“My whole world was there,” Reyes said. “My first language was English.”

As the sun set, they filed into the stadium to load up on fried pork skins and get settled in the bleachers before kickoff. When the first notes of “The Star-Spangled Banner” sounded, Reyes and the other deportees rose to their feet. It was the national anthem they knew best.