France: Hollande Defends Nation as Being Safe for Tourists, No Problem!

President Trump made some disparaging comments about France in his CPAC speech on Friday while discussing the general topic of jihad terror and public safety, which upset President Francois Hollande and other French officials.

I have a friend — he’s a very, very substantial guy. He loves the City of Lights. He loves Paris. For years, every year, during the summer, he would go to Paris — it was automatic — with his wife and his family. I hadn’t seen him in a while. And I said, Jim, let me ask you a question: How’s Paris doing? “Paris? I don’t go there anymore. Paris is no longer Paris.” That was four years — four, five years — hasn’t gone there. He wouldn’t miss it for anything. Now he doesn’t even think in terms of going there. Take a look at what’s happening to our world, folks, and we have to be smart. We have to be smart. We can’t let it happen to us. (Applause.)

French leaders are concerned about tourism falling even more, and bad news about terror attacks seems to blow up every few months, in particular the November 13 2015 co-ordinated attacks on several Paris locations where 130 people were killed. In response, the city has become an armed camp, with soldiers guarding popular tourist spots like the Eiffel Tower — where the city announced earlier this month that an “esthetic perimeter” would be built around the structure to protect it from France’s Muslim diversity.

It was reported last spring that half of France’s army was deployed on the streets of major cities. 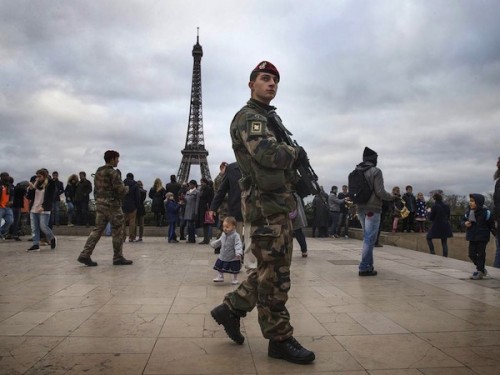 But the French are smiling bravely as if having thousands of soldiers on the streets is a totally ordinary way to live —although it is sadly becoming the new normal. On February 3, a soldier shot an assailant near the Louvre museum who was carrying a machete. Over Christmas, 91,000 soldiers and police were mobilized to protect churches and holiday festivities from unfriendly residents.

The last months have seen a number of public events cancelled because of security concerns. France is being strangled from within by diverse Muslim immigration, but Hollande doesn’t want anyone to notice. Someone should tell him that denial won’t help.

French President Francois Hollande fired back at Donald Trump on Saturday after the U.S. president remarked in a speech that a friend thought “Paris is no longer Paris” after attacks by Islamist militants.

“There is terrorism and we must fight it together. I think that it is never good to show the smallest defiance toward an allied country. I wouldn’t do it with the United States and I’m urging the U.S. president not to do it with France,” Hollande said.

“I won’t make comparisons but here, people don’t have access to guns. Here, you don’t have people with guns opening fire on the crowd simply for the satisfaction of causing drama and tragedy,” Hollande said, responding to questions during a visit at the Paris Agric fair.

During a speech at the Conservative Political Action Conference on Friday, Trump repeated his criticism of Europe’s handling of attacks by Islamist militants saying a friend “Jim” no longer wanted to take his family to Paris.

More than 230 people have died in a series of assaults in France since the beginning of 2015, and the country has been under a state of emergency rules since November the same year.

Trump’s comments also drew a rebuke from the mayor of Paris Anne Hidalgo.