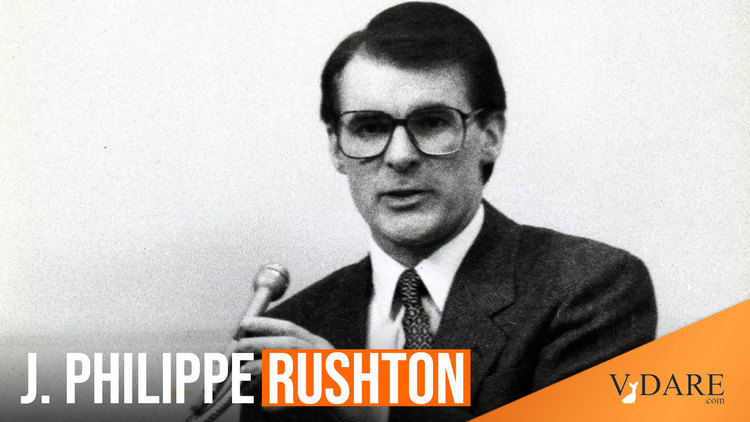 Salter and Harpending on Rushton's Theory of Ethnic Nepotism

From the journal Personality and Individual Differences in 2013:

Unreciprocated aid among co-ethnics and the emotional intensity of ethnic conflict have long been explanatory challenges to evolutionary science. J.P. Rushton’s theory of assortative ethnic affiliation–altruism, mating and friendship directed towards fellow ethnics–derives from his more general theory of genetic similarity (GST).

GST proposes that humans give preferential treatment to others in whom they detect genetic resemblance and that such behavior enhances genetic fitness.

The theory coincides with W.D. Hamilton’s theory of inclusive fitness as applied to relations between populations. GST helps explain core features of ethnicity, including its basis in putative kinship and correlation with gene frequencies. Ethnic nepotism due to similarity is a weak social force compared to social identity. However its pervasiveness makes it a potential driver of evolutionary and social change, a potential borne out by sociological studies of the impact of ethnic diversity on social cohesion and public altruism.

Genomics confirms the theory for interactions within populations with sufficient genetic diversity, such as ethnically mixed societies. GST applied to ethnicity is promising for further research in evolutionary social science because it unifies evolutionary and behavioral mechanisms in a single theory.

Harpending pointed out that if he were going to visit a grandchild he’d never met before and came upon a group of white children playing on the sidewalk in front of the address he’d been given, he’d be challenged to identify his own grandchild. In contrast, if the group of children were of different races, he’d have no more and probably less trouble identifying them by race.