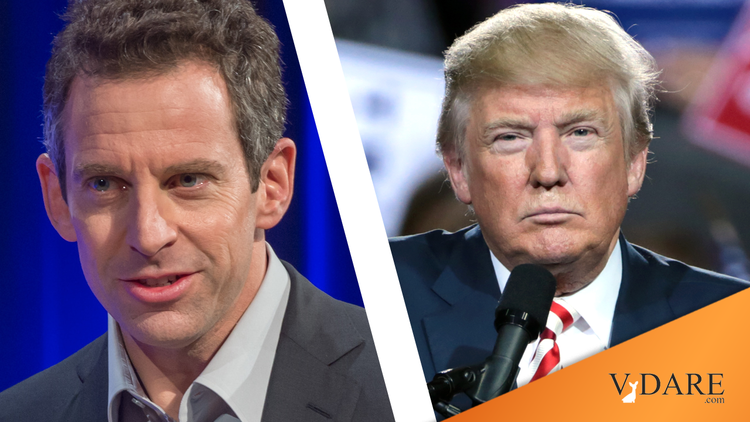 SALON: Why Donald Trump and Sam Harris Are So Alike

… He opted not to submit articles to media outlets that imposed some editorial control over what they publish. Instead, he created a small media empire that enabled him to say whatever he wants, whether or not the message is misleading, the claims are factually erroneous, the reasoning is fallacious and so on. In other words, he figured out a way to bypass intellectual accountability — to opine as much as he wants about topics he doesn’t understand without peer-review, editorial oversight or other quality-control measures.

Indeed, so far as I can tell, Harris has become one of the greatest sources of misinformation on social justice issues in the United States today. His contribution to scientific racism — his boosting the visibility of claims like Black people are almost certainly dumber than white people for genetic reasons — will no doubt be one of his greatest, and darkest, legacies.

Consider this anecdote from a few years ago. I was in Sweden for a two-month-long workshop. During lunch one day I was speaking to a professor at the local university and the uncomfortable topic of race and IQ came up. He told me that he has come to embrace (in his words) the “racist view,” according to which white people are intellectually superior to Black people because of evolution. He further told me that it is only once one accepts this view that white folks can be genuinely empathetic toward Black people. That is, by recognizing that “they can’t help it,” we can take on the burden of helping them out.

Over the course of an excruciating two hours (in every moment of which I wanted to defenestrate myself), I explained the problems with “IQ” as a metric of intelligence and went over some of the data about how horrifically widespread heavy-metal poisoning and malnutrition is in poorer regions of the world.

Malnutrition and heavy-metal poisoning is why African-Americans, such as LeBron James and Zion Williamson, tend to be so short and scrawny.

By the very end, he told me that I had nearly talked him out of the “racist view.”

The point here is this: Literally the first thing I asked when he explained his "racist view" was, "Why do you think that?" And his response was: "Well, I mean, listen to Sam Harris. Listen to his interview with Charles Murray. Listen to the points that he made in his podcast interview with Josh Zepps." Indeed, so far as I know, the Zepps podcast was Harris's most explicit statement that affirmed his racist convictions. To quote him in full:

And as bad luck would have it, but as you absolutely predict on the basis of just sheer biology, different populations of people, different racial groups, different ethnicities, different groups of people who have been historically isolated from one another geographically, test differently in terms of their average on this measure of cognitive function. So if you’re gonna give the Japanese and the Ashkenazi Jews and African Americans and Hawaiians … you’re gonna take populations who differ genetically — and we know they differ genetically, that’s not debatable — and you give them IQ tests, it would be a miracle if every single population had the exact same mean IQ. And African Americans come out about a standard deviation lower than white Americans. A standard deviation for IQ is about 15 points. So, if it’s normed to the general population, predominantly white population for an average of 100, the average in the African American community has been around 85.

There is simply no other interpretation of this than “Black people are genetically dumber.” What’s worse is that Harris presents this as if it’s the unavoidable, obviously true inference from the indisputable facts. This is where the Trumpian strategy of avoiding peer-review, editorial oversight, and quality control comes into the picture with force: There are profoundly strong reasons for rejecting all of this. Yet Harris’ adoring audience of mostly white men (including a lot of Trump supporters) would never know this listening to him. He’s done everything possible not to foster debate but to edit out — to cancel, if you will — dissenting voices.

In contrast, the dissenters who push much more scientific explanations, like that the universe is pervaded by an unseeable, unmeasurable, unfalsifiable substance known as Systemic Racism, must hold out from their lonely islands of refuge from combined might of Sam Harris and Charles Murray at their major media, academic, and NGO sinecures.

Seriously … Briefly, the scientific evidence is overwhelming that at present, African-Americans on average are not as intelligent as non-black Americans, with intelligence being defined in the standard as sense as the traits that can be measured with pencil and paper cognitive problems that correlate with school and job performance.

So far, no good theoretical reasons have been put forward for why this noticeable but not immense gap in cognitive abilities could not possibly be genetic in sizable measure.

On the other hand, final proof that genes do play a role in The Gap hasn’t arrived yet. The discovery of the existence of the Flynn Effect several decades ago shows that these can be complex questions with unexpected answers.

But the infrastructure that might be able to deliver that proof is being assembled for other purposes. I would suggest that public intellectuals who are ill-equipped to engage in the actual scientific research should be thinking about two questions:

First, is there a more persuasive theory for explaining African-American cognitive underachievement in 2020 than merely shouting ever-louder about the events of the ever-receding past such as Emmett Till and redlining? In reality, of course, progressives have dominated all aspects of our culture when it comes to race for about three score years. Perhaps the failure of blacks to catch up with, say, Mexican-Americans in 2020 has less to do with 1619 and more to do with the conventional wisdom that emerged in, say, 1969 and has only grown more dogmatic since then. Perhaps blacks' performance in America is mediocre in 2020 less because they were oppressed in 1619 than because they were coddled in 2019?

What could we change in 21st Century American culture to improve the behavior of African-Americans so that they don’t commit so many murders and so they try harder in school?

Secondly, public intellectuals should be pondering how best to prepare the public for the likely deluge of scientific discoveries that will completely undermine most of the propaganda of recent decades. Rather than doubling down on their old favorite — “The Bell Curve couldn’t possibly be scientifically true because that would mean … HITLER WAS RIGHT!”—platformed public intellectuals should be thinking about how to prepare for their graceful retreats. For example, admitting that even if Charles Murray turned out to be right, that doesn’t mean we should invade Poland.