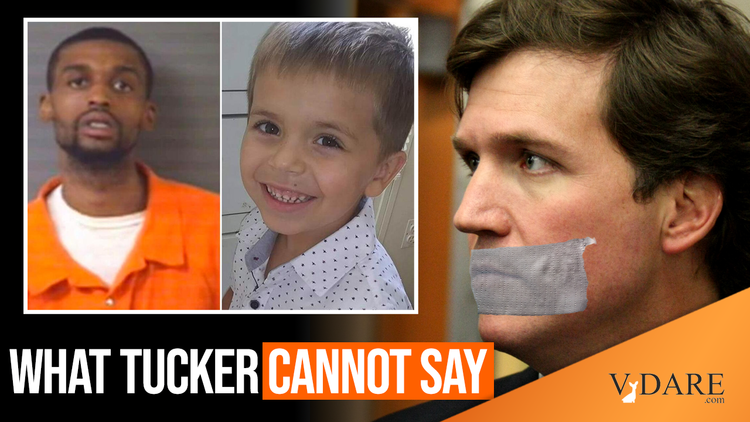 What Tucker Carlson Can't Say, But We Must—Whites Have Two Choices: Submission Or Rebellion

Earlier, by Peter Brimelow: Trump Should Be Tweeting About Cannon Hinnant, Because The MSM Is STILL Not Covering His Murder

It's very sad that Tucker Carlson, whom I admire and watch every night, is in a virtual straightjacket and is hobbled by what he cannot say on his show. When he talks about anti-white hate  crime, he's not allowed to say the killer was black.

Even Tucker not allowed to mention Cannon’s, killer’s race, you’re supposed to tell from pics https://t.co/yKdmWBI2bZ

When he says the Chinese love their country, despite the repression, he's not allowed to say it's because they are mostly all Han Chinese.

Anyone who has eyes to see can readily identify the profound differences between whites and blacks. The general population accepts many material physical differences, but somehow these differences stop at the brain. How can that be? It doesn’t!

The "inequities" are not due to racism, but to nature. If you have eyes, you can see for yourself. There’s overwhelming evidence that blacks do not perform well, currently or historically, in any country where they live, whether it be a predominantly white or black society. But there exists an overwhelming ideological tenet and a hope and a prayer that this cannot be true. A moral imperative that people who question this truism are morally defective.

Any attempt to even open up this discussion results in massive pathological and irrational behavior for tens of millions of people, including huge numbers of whites. This leads to a tortuous and violent road for those of all races and overwhelming bigotry and hatred. Attempting to bring about and indoctrinate ourselves and our children with this erroneous concept of "equality" has failed and each failure has brought about more hysterical measures that lead to more tyrannical and pathological "solutions." Every failure increases frustration and desperation.

This results in an even deeper belief that racism is so prevalent and insidious that it permeates every institution. It brings about the idea that the only way to solve this problem is via tyranny and the destruction of every cultural, political and financial institution in the West. It is rarely looked upon as whites trying to do the right thing. They must be taught to hate themselves more, for what else could be causing these failures to achieve the desired results. All of these attempts for equality are hopeless because it is based upon a lie. Perhaps, the final result will be a Marxist dictatorship with white enslavement and acceptance of their fate.